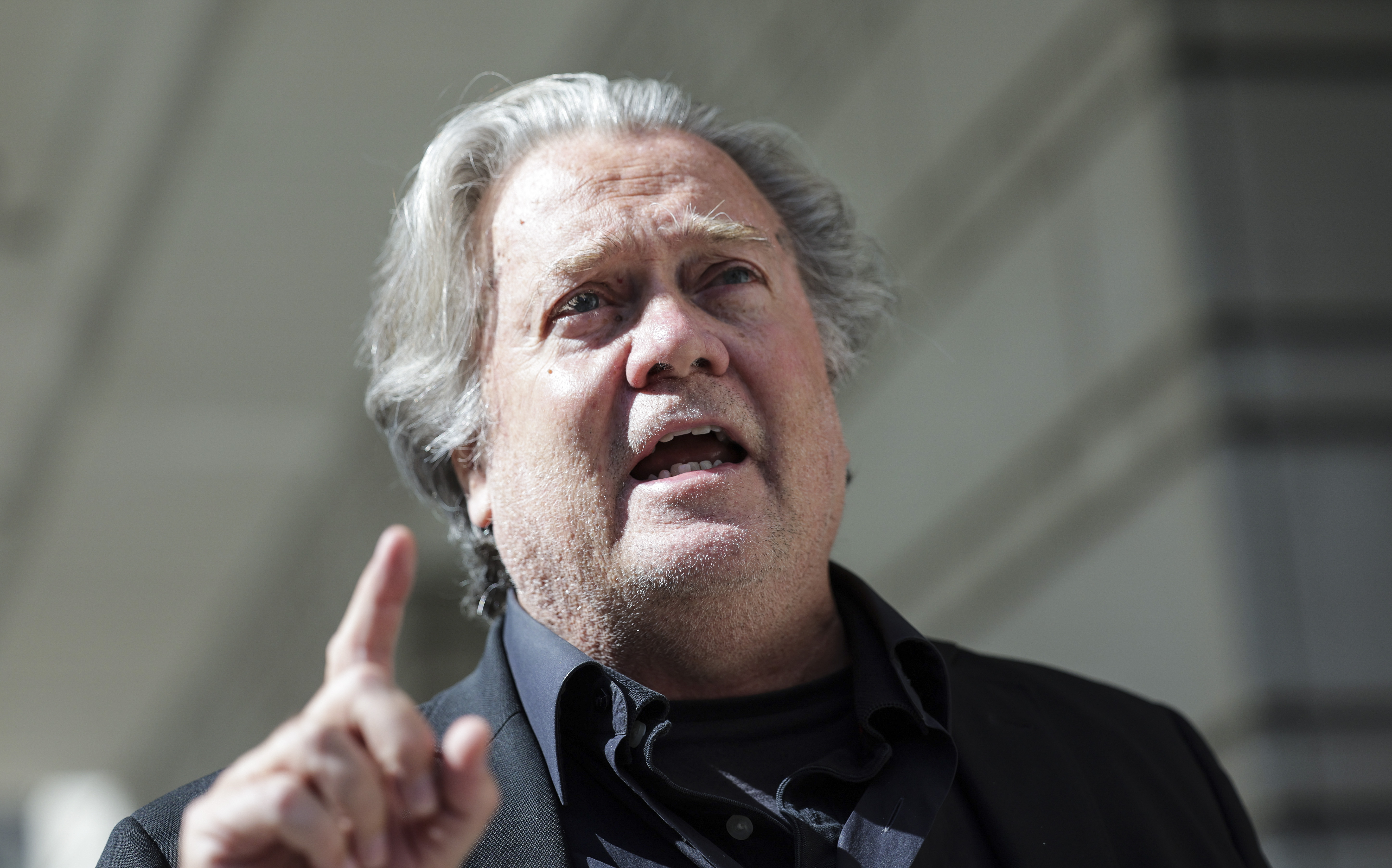 Former Trump White House adviser Steve Bannon passed up his chance Thursday to call witnesses or take the stand himself in his contempt of Congress trial, clearing the way for the jury to begin deliberating in the case by Friday morning.

“The jury has now heard all of the evidence it will hear,” U.S. District Court Judge Carl Nichols declared shortly after Bannon’s attorney David Schoen said the defense was preparing to rest in the case over Bannon’s failure to comply with a subpoena from the House Jan. 6 select committee.

The announcement from Schoen came during court proceedings Thursday morning outside the presence of the jury. “Mr. Bannon won’t be testifying,” Schoen added.

Schoen later read a statement declaring that Bannon wasn’t testifying because Nichols had ruled out most of the defenses Bannon wanted to discuss, including an assertion of executive privilege by former President Donald Trump and that he relied on an attorney’s advice in declining to respond to the subpoena.

Jurors appeared in the courtroom Thursday for only a few minutes. They did not hear any explanation of Bannon’s decision. The only official word they received that the defendant would not testify was through Bannon lawyer Evan Corcoran declaring, “The defense rests, your honor.” A short time later, Nichols sent jurors home to return Friday for final instructions and closing arguments.

However, as usual, Bannon and his lawyers strode to the cameras and reporters outside the courthouse at the end of the day and explained why the former senior adviser to Trump was passing up his chance to testify.

“He has wanted, at all times, wanted to testify before Congress. He told them in the very first letter he would comply if they go before a judge and the judge orders him—orders that the executive privilege wasn’t valid,” Schoen said. “He’s not someone who thought he was above the law—ever…..Once the judge cut out all of the defenses in the case, he wasn’t able to ever tell his story.”

“Of any person in the Trump administration, Steven K. Bannon has testified, what, 30 hours in front of the Mueller commission? I think, 20 hours…in the House Intelligence Committee in the SCIF. And then in front of Senate Intelligence. I think over 50 hours of testimony,” Bannon said. “Every time, every single time, more than anybody else in the Trump administration….Steven K. Bannon testified.”

Bannon’s team had also suggested in pretrial motions that it could call his attorney, Robert Costello, as a witness but ultimately opted against it. Costello represented Bannon in his negotiations with the Jan. 6 select committee over a subpoena issued in September. Bannon defied the select committee’s demand to appear, leading the House to hold him in contempt in late October 2021. The Justice Department charged him with two counts of contempt of Congress three weeks later.

The select committee views Bannon as an important ally in Donald Trump’s effort to overturn the 2020 election. They sought his testimony in its first batch of subpoenas last year, requesting testimony and documents related to his conversations with Trump and foreshadowing of chaos on Jan. 6. Bannon is one of four witnesses the House has held in contempt. One of them, former Trump White House trade adviser Peter Navarro, was charged by the Justice Department last month. DOJ declined to charge the others, former Chief of Staff Mark Meadows and Trump social media chief Dan Scavino.

Costello told the committee that Bannon could not comply with the subpoena because Trump had asserted executive privilege over the testimony and documents the panel requested. But the panel rejected that claim and noted that Trump did not appear to have instructed Bannon to simply refuse to show up for a deposition that could have covered a wide variety of topics.

The defense witness list for the trial proved to be only slightly shorter than the prosecution’s. After opening arguments on Tuesday, the government called only two witnesses: House Jan. 6 select committee Chief Counsel Kristen Amerling and FBI Special agent Stephen Hart.

Amerling provided often dry, technical testimony about the logistical mechanics of the committee’s process for issuing subpoenas. She faced a smattering of defense questions about her career working for Democratic members of Congress and about her political donations. Amerling was also asked about her ties to a member of the prosecution team through a long-running book club.

Hart testified about posts on Bannon’s account on the social media site GETTR in which he appeared to be proudly touting his decision to defy the House subpoena. The FBI agent also discussed a meeting in which Costello unsuccessfully sought to persuade prosecutors not to bring criminal charges against Bannon.

Bannon, appeared cheerful for much of the morning, when he wasn’t transfixed by his phone. He sat quietly as his attorneys and prosecutors thrashed out legal issues in the case, including the impact of the House’s refusal to send Speaker Nancy Pelosi, Jan. 6 Committee Chair Bennie Thompson and other committee members to testify as defense witnesses.

“Our view is we’ve been badly stymied … based on the court’s rulings,” Schoen said, asking that the case be thrown out because the absence of the lawmakers as witnesses so undercut Bannon’s defense.

Nichols reiterated that he blocked Bannon’s advice-of-counsel and executive privilege defenses because he believed a 61-year-old appeals court precedent required that, but the judge made clear he thinks that precedent may be wrong.

“I was bound by D.C. Circuit precedent that I’m not even sure is right,” said the judge.

At another point Thursday, Bannon lawyer Evan Corcoran sought to persuade Nichols that the prosecution presented such a weak case that he should acquit Bannon without the issue ever reaching the jury.

“There was no evidence presented that the defendant is guilty. There was no evidence that a reasonable mind could find that Mr. Bannon has committed the crimes,” Corcoran said, before going on to question whether the government proved Thompson ever signed the subpoena and whether he had selected the deadlines on it.

One of the prosecutors on the case, Assistant U.S. Attorney Amanda Vaughn, seemed dismissive of the defense arguments. “The reason for the dates are irrelevant. The dates are on the subpoena,” she said.

Nichols said in an order Thursday afternoon that he planned to wait until after the jury’s verdict to rule on both the motion to throw out the case due to the lack of House member witnesses and for alleged insufficient proof by the prosecution. Both motions would be moot if Bannon is acquitted by the jury.

Bannon faces up to a year in prison on each of the two misdemeanor contempt charges at issue in the case: one for failing to testify and another for failing to deliver any of the documents the committee demanded.