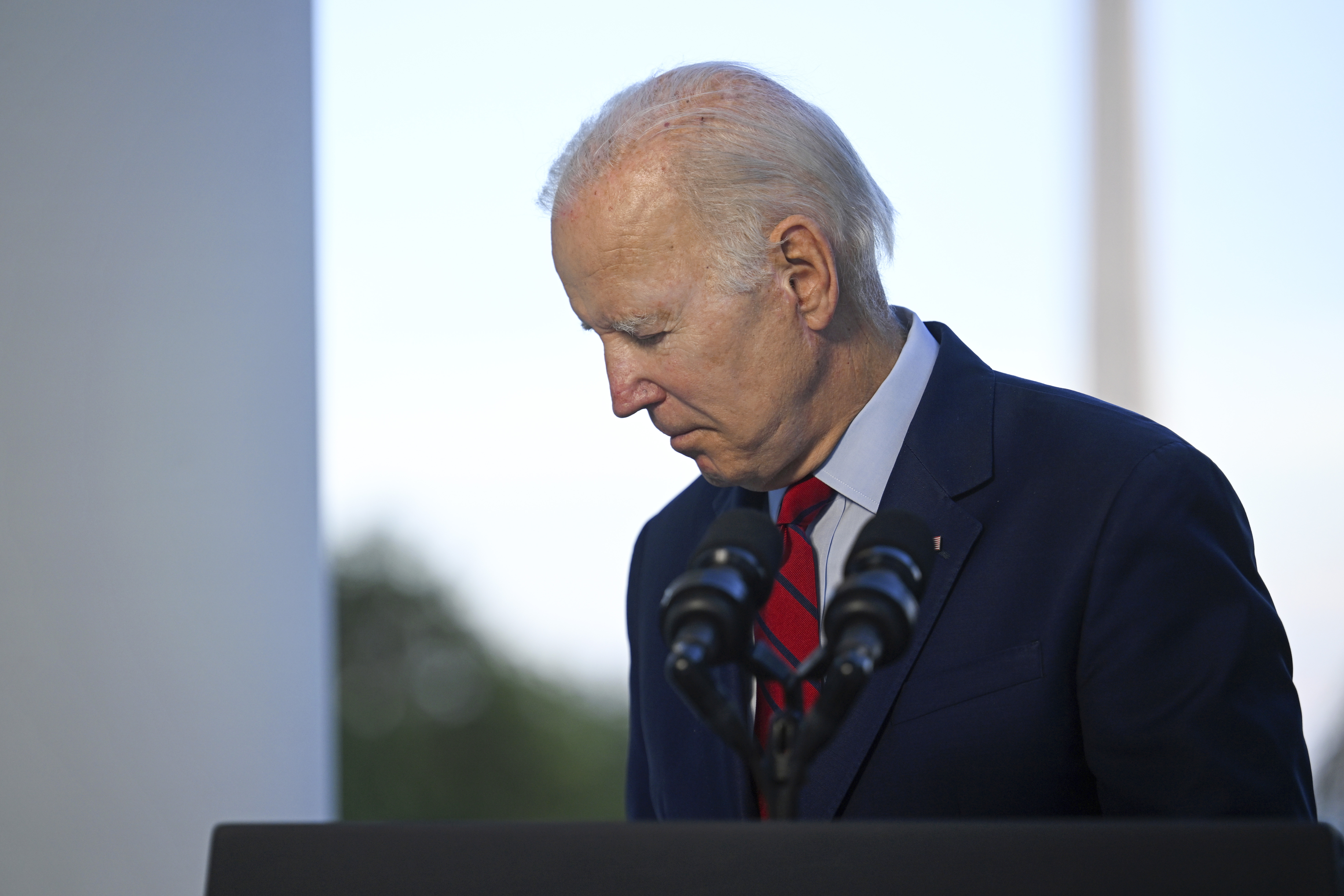 With Democrats increasingly airing their doubts about Joe Biden’s presidency, one allied Democratic National Committee member decided it was time to try and plug the chatter.

William Owen of Tennessee recently drafted a resolution to put his fellow committee members on record as being supportive of the sitting president. The DNC has approved similar measures for past presidents. But the motivation this time was different. Owen said he wanted to blunt the pessimism surrounding Biden that was emanating from within the party’s own ranks.

“I keep reading all of these articles about Democrats saying they don’t want him to run,” Owen said, adding that the resolution he’s proposing to take up next month will “put all the DNC folks on record saying they are supporting him.”

That a DNC member felt the need to get his colleagues on record about their party’s leader speaks to the political predicament Biden finds himself in. Less than 100 days before the midterm elections, the president’s job approval rating has fallen below 40 percent, and polls suggest majorities of Democrats would prefer a different nominee in 2024. Even now, coming off his best week in recent memory — with the recalcitrant Sen. Joe Manchin (D-W.Va.) agreeing to a major climate, tax and health care bill and Biden announcing the killing of al Qaeda leader Ayman al-Zawahri in a drone strike — the president can’t seem to escape the intraparty skepticism.

Over the weekend and in subsequent interviews this week, Manchin declined to endorse Biden’s reelection. Rep. Dean Phillips (D-Minn.), said publicly that he doesn’t want Biden to run again, and on Tuesday, Rep. Carolyn Maloney (D-N.Y.) said she doesn’t “believe” he will.

“Any [midterm election candidate] who’s polling is getting a poll back right now showing the president is more of a drag than Obama was in the midterms,” said Danielle Cendejas, a Democratic strategist whose firm did campaign mail for both of Barack Obama’s presidential campaigns. “That, I think, leads to a pile on of Democrats who are frustrated about their prospects.”

For Biden, who is still testing positive for Covid-19, she said, “In this environment, he’s just in such a tough spot. The poor guy can’t even get sympathy for being sick.”

Inside the White House, aides fear comments like those from Phillips and Maloney could embolden other elected leaders to join suit. Already, they have watched as Democratic leaders spent weeks dodging questions about whether they want Biden to run.

To push back on the emerging narrative, they’ve deliberately sought out supportive voices — and highlighted the remarks of others, including Democratic Sen. Elizabeth Warren of Massachusetts and Govs. Gavin Newsom of California and J.B. Pritzker of Illinois, who have lent their encouragement to a Biden 2024 bid.

White House spokesperson Chris Meagher said Biden “is focused on delivering results for working families, building the economy from the bottom up and middle out – getting Americans back to work, making our communities safer, and cutting costs for families.” Aides note the string of recent accomplishments they’ve scored and the testimony from other Democrats that this first term could shape up to be historically productive.

In the statement, Meagher added that “MAGA Congressional Republicans are advancing an extreme agenda: putting Social Security and Medicare on the chopping block, proposing a national ban on abortion, and oppose common sense proposals to raise the age to purchase an assault weapon.”

But privately, Biden aides and advisers also are increasingly resigned to the fact that his standing won’t meaningfully rebound before November, even with the slate of recent good news and the possibility of a major prescription drug and climate bill being passed before the election.

“The numbers are the numbers,” said one Biden confidant, who went on to immediately argue that the president’s standing going into the midterms would improve ahead of 2024.

Part of what has fed despair in the party is the inability of the White House to turn around its numbers. Even as the price of gas has fallen dramatically and the Manchin agreement was announced, Biden’s job approval rating barely changed, ticking up two points from the previous week to 39 percent in Wednesday’s POLITICO/Morning Consult poll.

One adviser to major Democratic donors conceded that outside of Washington, “nobody gives a shit” about the Manchin legislative breakthrough. “[The Biden administration] doesn’t understand that the only thing people care about is inflation, gas prices and the economy writ large.”

“Of course there’s no messaging, and of course they don’t have any idea what the message is,” the adviser added. “They’re living in La La Land.”

Another senior Democratic strategist, who spoke on condition of anonymity to protect client relationships, said they had conducted extensive interviews with swing-state voters ahead of the midterms. The conclusion from those surveyed was that Biden’s persistently weak standing had to do with voters’ fatigue, on everything from the lingering pandemic to the spate of mass shootings, which injected a higher degree of fear into peoples’ lives.

“Americans are looking for someone that will make them feel something — anything — again,” the strategist said.

But to other Democrats, Biden is a victim of a national media ecosystem trying to prove its toughness covering a Democratic presidency after four years of Donald Trump — and the White House’s inability to adapt to that reality.

“I don’t think that [Biden’s] handled that as well as you would like,” said Matt Angle, a longtime Democratic consultant from Texas. “If four things good happen in one day and one bad thing happens, the story is gonna be about the one bad thing and that may just be a product of the times that we’re in. The negative polls create stories about negative polls, and then it all kind of builds on itself.”

A president’s public approval rating is historically closely tied to his party’s performance in the midterms, and there is almost no reason to think Biden’s numbers will improve before November. Presidents at this point in the midterm election calendar have traditionally not mustered a late bounce.

Still, the generic congressional ballot — perhaps a better indicator of midterm performance — has been looking better for Democrats in recent weeks. And the party on Tuesday celebrated a rare victory in Kansas, where voters in a heavily Republican state overwhelmingly rejected an anti-abortion state constitutional amendment. The result suggested the Supreme Court’s overturning of Roe v. Wade could improve the party’s prospects in some swing states and suburban House districts.

There’s also an emergent, albeit minority, view among Democrats that candidates in the 2022 cycle can successfully decouple from Biden and his diminished standing with voters — and that they could do it, primarily, by running against Trump and Trumpism.

“It was always difficult for Republicans to win when they embraced MAGA. Once that decision was made, this election became not a typical midterm,” said Simon Rosenberg, a Democratic strategist who is loudly challenging the conventional wisdom that the GOP will score big in the midterms. “People continue to argue that this is a typical election and they are wrong. They were wrong all along.”

But even if Democrats stave off the most disastrous outcome in November — losing the Senate — it won’t be because of Biden.

Like some other Democrats, Owen suggested that if the Manchin climate and prescription drug deal passes, the unemployment rate remains low and gas drops below $4 a gallon — all credible possibilities — Democrats may escape the midterms suffering less damage than has widely been expected. His proposed resolution, which could be amended before the DNC takes it up, does not mention 2024, but asks DNC members to express “our full and complete support” for Biden and his administration. Democrats, he said, could even hold onto their majority in the House.

But Democrats have found reasons for optimism before and been disappointed. Last year, it was an infrastructure package and a $1.9 trillion coronavirus relief bill many in the party believed could turn things around, only for those wins to be eclipsed by other matters, including the pandemic and inflation.

“Everyone is looking at this reconciliation bill, and it’s something,” said Aaron Chappell, political director of the Sen. Bernie Sanders-aligned group, Our Revolution. “But it’s late, and it’s little … Should it pass? Yes. Is it enough to deal with widespread frustrations with the president, especially with the progressive base? We’ll have to see.”

The president’s unpopularity does complicate the degree to which he’s personally involved in the midterms beyond raising money. And while a midterm drumming for Democrats would damage Biden’s standing further, previous presidents have recovered from such scenarios. Biden — if he runs again — would almost certainly be re-nominated.

“If Joe Biden is compared with the unspoken or unidentified ideal, then sure it’s easy to rag on him and find somebody else better,” Angle said. “But the truth of the matter is that if Joe Biden runs for re-election, he’s going to be seen straight up against Donald Trump, or Ron DeSantis or somebody who’s very polarizing. They’ll have a lot of negatives, and Biden will start to look really good against them.”

Even Biden’s internal party skeptics concede as much. One Democratic strategist critical of Biden noted that the last time a sitting Democratic president was seriously challenged was when Sen. Ted Kennedy (D-Mass.) took on Jimmy Carter, “and Carter still came out on top.”

He added: “The other half of the equation is, ‘Who’s our Ted Kennedy?’ I don’t see a Ted Kennedy standing around.”