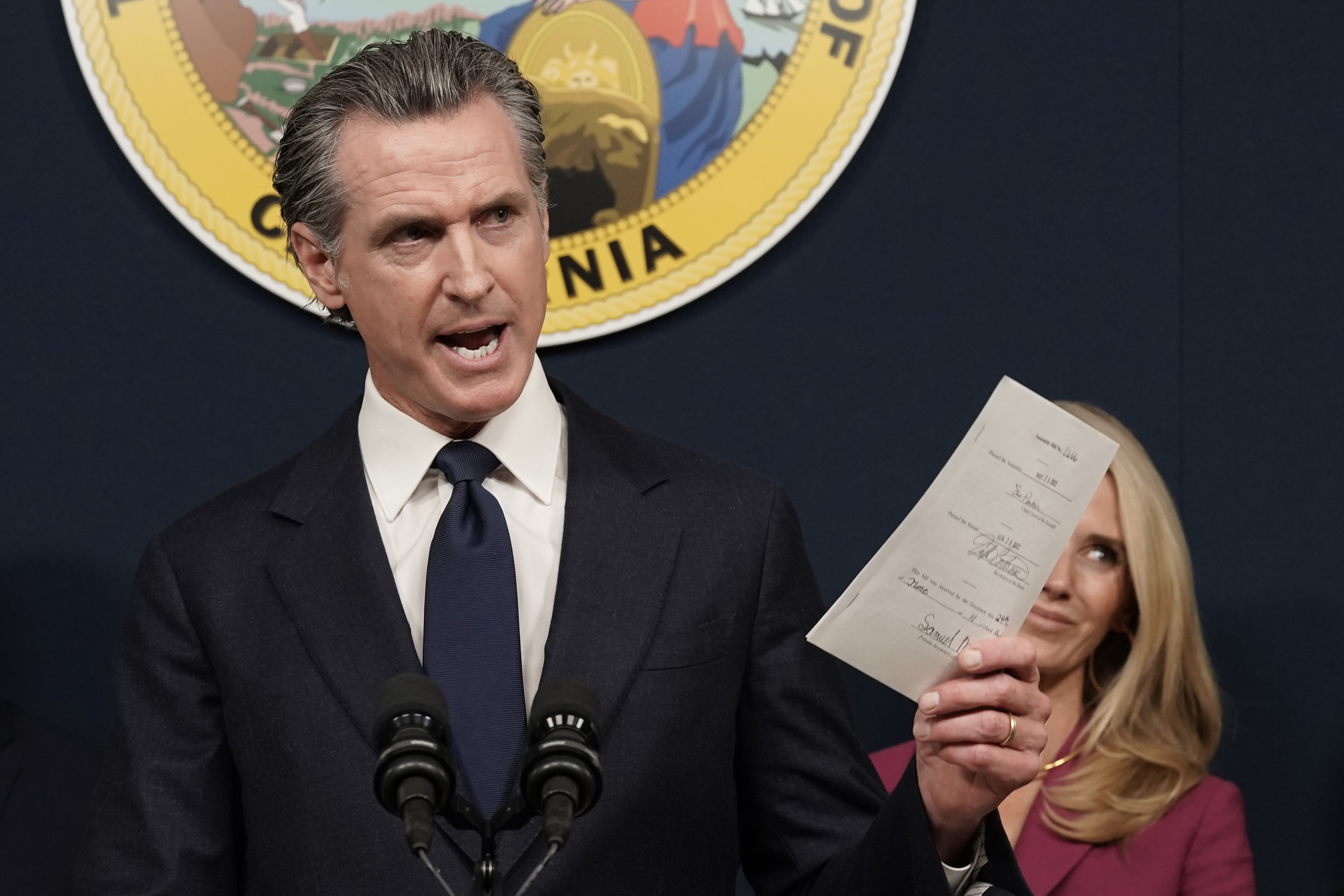 California has issued the U.S. Supreme Court a direct challenge at the confluence of gun and abortion rights as Gov. Gavin Newsom signed a firearms bill embracing the doctrine of private enforcement.

The new law allows Californians to sue manufacturers and citizens who distribute banned assault weapons or ghost guns. Newsom explicitly modeled the concept on a Texas law, preserved by the high court, that allows people to pursue legal claims against abortion providers.

By calling for and then signing the bill, Newsom has set up a legal test while illuminating the gulf between liberal California and a conservative Supreme Court on politically charged issues.

The governor has maintained the measure is about protecting Californians from gun violence. But it also sends a message to a Supreme Court whose rulings Newsom and fellow California Democrats have derided, essentially daring it to either uphold the gun law or reconsider its logic in backing Texas’s approach.

“The question is whether they are complete and abject hypocrites and frauds if they reject our bill that’s modeled after that abortion bill as it relates to private right of action to go after assault weapons,” Newsom said this month.

Yet the law could stand on precarious legal ground. Even Democratic legislators who favor gun restrictions said as much in passing the bill, conceding that it employed a dubious legal strategy in the service of a larger goal.

“It is my hope and desire that ultimately this bill actually not proceed because the Texas law is found to be wrong, unconstitutional and crazy,” state Sen. Tom Umberg (D-Santa Ana) said before voting for the measure in April.

It also drew fierce opposition from ideological allies of Newsom who warned he was empowering the very type of reasoning he had condemned. “There is no way to ‘take advantage of the flawed logic’ of the Texas law,” ACLU California Action said in a statement, warning of “a radical and dangerous assault on our constitutional structure” that could “escalate an ‘arms race’ of new weapons to curtail the adjudication of rights by setting up bounty-hunting schemes on politically sensitive issues.”

Days earlier, Newsom signed a similar bill allowing individual Californians, the attorney general, cities, and counties to sue gun manufacturers for negligence. The law mirrors a newly enacted New York measure that has so far survived legal challenges. “If you’ve been hurt or a family member is a victim of gun violence, you can now go to court and hold these makers of deadly weapons accountable,” Newsom said in a video message.

Both gun lawsuits bills, along with California’s larger universe of firearms restrictions, could be under threat after the Supreme Court embraced an expansive Second Amendment interpretation in striking down concealed carry permits. California responded by simultaneously ceding some discretion over who can receive permits and pursuing new legislation to create new requirements.

Democrats have continued to advance new gun restrictions as a series of mass shootings — including at a school in Uvalde, Texas and down the street from the state Capitol in Sacramento — fortified their resolve to act. But the high court’s ruling could imperil restrictions like California’s bans on assault weapons and high-capacity magazines, both of which are entangled in court challenges.

California and other states are charting a new gun law landscape in the wake of the high court’s ruling, exploring how far they can go under a new legal standard. That process will play out in blue state legislatures and courts over the next few years.