Inside the Pentagon slugfest over the future of the fleet

At different points this year, the Pentagon and Navy leaders have floated all five numbers as the desired size of the Navy, the result of a high-stakes — and still raging — internal battle among top Navy, Marine Corps and Pentagon leaders.

And the discord at the top has real-world consequences for America’s sea service, denying lawmakers a number to shoot for as they figure out how many ships to buy in the fiscal year that starts in October, and beyond.

At issue, according to six people with knowledge of internal discussions, is the desired number of amphibious warships, which carry Marines and can launch warplanes and landing craft.

On one end is Deputy Defense Secretary Kathleen Hicks, who is spearheading an effort to cut the number of traditional, large-deck amphibs and invest in uncrewed ships and other lighter vessels, the people said. But Hicks’ vision is at odds with plans put forth by Navy and Marine Corps leaders, who want to keep dozens of the ships they say are a key component to moving Marines and aircraft around the Indo-Pacific as the U.S. seeks to deter an aggressive China.

The debate comes at a fraught time for the Navy as it struggles to grow the size of its fleet amid a series of shipbuilding failures that have drained congressional confidence in the service’s ability to both put new ships in the water and maintain the ships they have.

“The Navy is broken. Shipbuilding is broken,” said John Ferrari, a nonresident senior fellow at the American Enterprise Institute. “Every two years the Navy is forced to come up with a 30-year plan that needs to be built and really needs to be planned for over two decades. 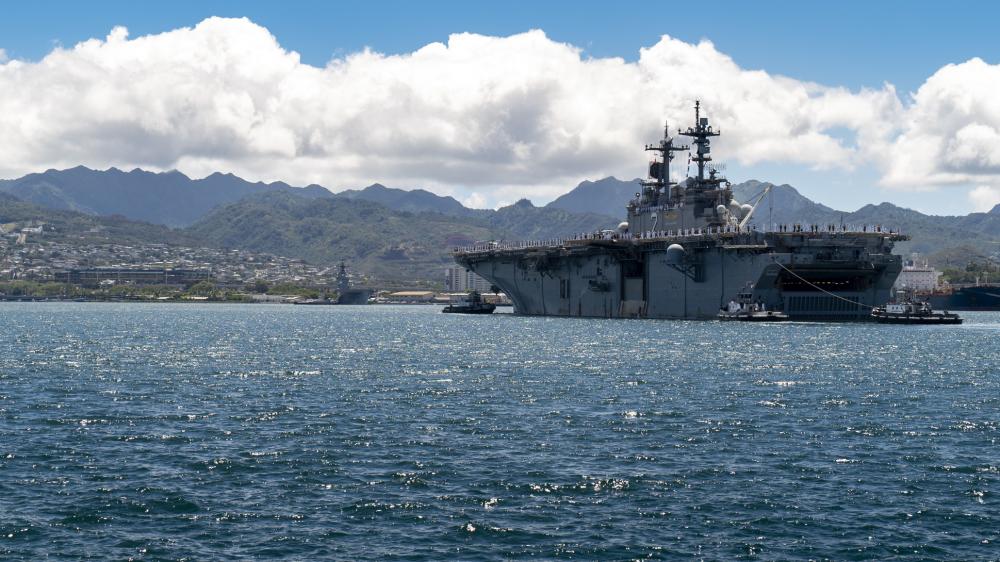 Some critics see the large ships as easy prey for Chinese long-range missiles, while being too big to get close to the small island chains of the Pacific to safely put Marines ashore and resupply them. Instead, the idea is for the Navy to get smaller, faster and develop more uncrewed systems.

But Navy Secretary Carlos Del Toro, a Biden appointee and retired naval officer, has been a proponent of keeping the number of amphibs around its current strength of 31, a vision shared by Marine Corps Commandant Gen. David Berger who won support in Congress this year to block Pentagon plans to have the fleet shrink to 25 ships in the coming years.

Yet Marine and Navy leaders are at odds with each other over another issue: Berger also wants to add 35 new light amphibious warships to allow his Marines to move through island chains more quickly while presenting less of a target. That’s a vision Navy leadership has never fully supported.

Differing opinions at the top of the Pentagon and Navy leadership chains is nothing new. Given the huge costs involved in designing and building new ships, the overall size and shape of the fleet has always been a politically fraught issue. And the constantly shifting global security dynamic often leads to clashes between the admirals and civilians at the Pentagon and Capitol Hill.

But what is new is the lack of a united front in public when numbers are supplied to Congress.

“The longer they wait to get on the same page, the higher the risk will be for our sailors and our nation,” Mississippi Republican Sen. Roger Wicker, a member of the Senate Armed Services Committee, said in a statement. His home state includes Ingalls Shipbuilding, a division of Huntington Ingalls Industries.

The Marine Corps did not reply to a request for comment. 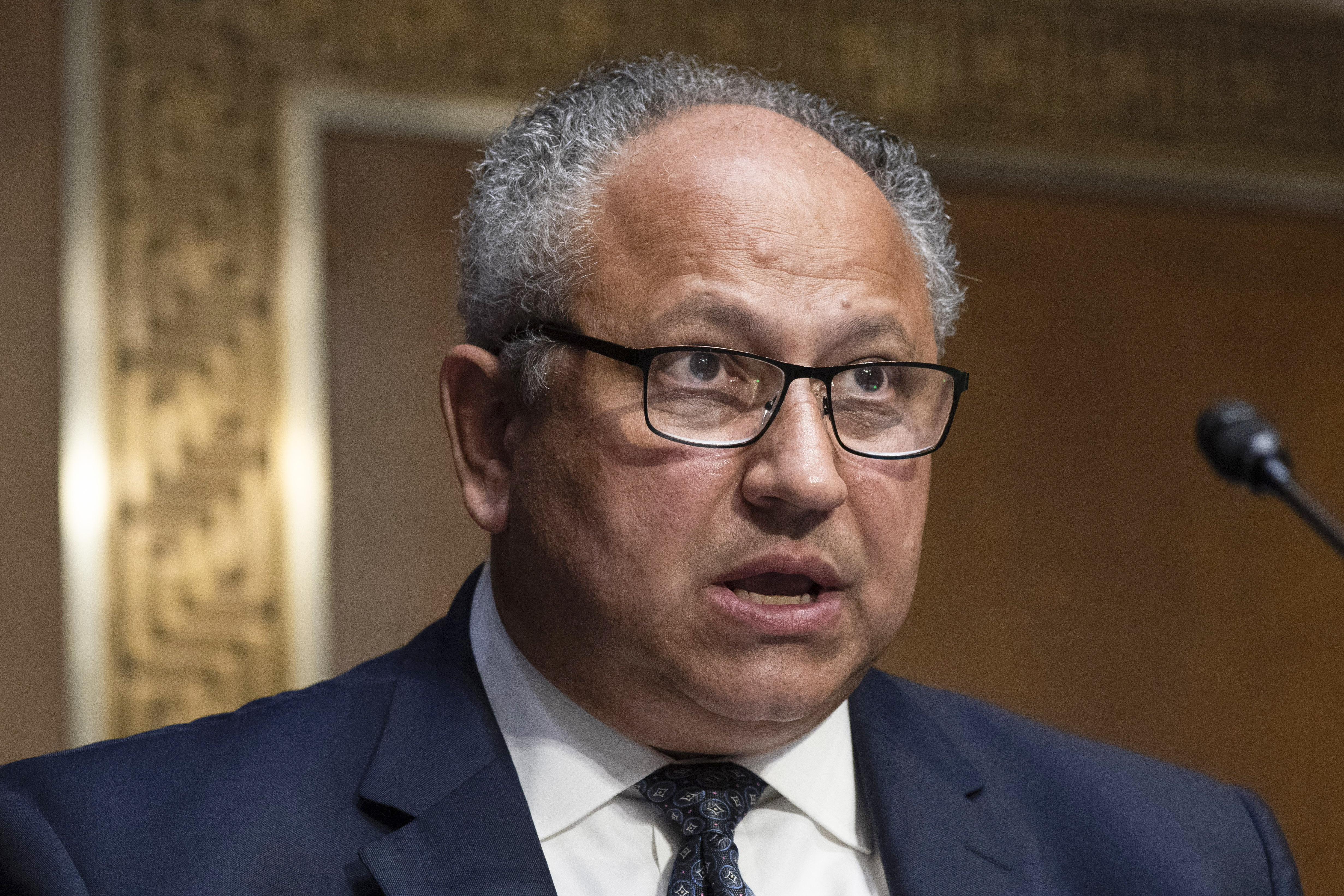 The Navy’s own targets for building its fleet of the future have been in constant flux since it declared the need for 355 ships in 2016. There has never been a workable plan to get there, and successive administrations have failed to fund a fleet of that size or sign off on a viable plan to build more ships.

During the Trump administration, national security adviser Robert O’Brien and Defense Secretary Mark Esper seized on the 355 figure — as Trump did in his presidential campaign — but then oversaw successive budgets that actually cut shipbuilding funding by billions of dollars. At one point in early 2020, Esper rejected the Navy’s annual shipbuilding plan, taking control over the process and holding up its release for almost a year, only to release it in December 2020 — a month before Joe Biden moved into the White House, all but ensuring they would be scrapped immediately by the new team.

The plan was also likely impossible to implement, calling for a fleet of over 500 ships by 2045, a dramatic increase from the 298 ships in service today. To get there, it proposed building 82 new ships by 2026, doubling the Navy’s previous plan to manufacture 44 new ships by 2025, a pace of building that would likely be unachievable for the U.S. shipbuilding industry.

While that plan didn’t survive the transition between administrations, Chief of Naval Operations Adm. Mike Gilday has continued to defend it well into the new administration, saying as recently as February that it remains “the one that I’ve based my best advice on,” even as he was proposing a new budget along with another new shipbuilding plan, which incorporated nothing from Esper’s wishlist.

And through it all, Congress and the defense industry have grown tired of the Navy’s shifting numbers. Putting forward a new shipbuilding plan every year makes it impossible to maintain a stable supply line and keep ships rolling out of the shipyards, and the constantly moving target confuses both lawmakers and contractors.

In April of this year, the Navy released its latest 30-year shipbuilding plan that contained three options: 316 ships, 327 ships, and 367 ships, all with different assumptions over budget and what kinds of ships were purchased. Then in June, the Navy sent Congress a classified report saying its plans called for 373 ships, USNI News reported. But a Navy official told POLITICO that the new report focused only on operational needs, and ignored budgets and shipyard capacity, giving it no real connection to the realities of budgets or the industrial base. The Navy plans to send an update of that report to the Hill this year.

Through it all, Gilday continues to insist that, given the Chinese threat, the Navy needs more than 500 ships in the fleet.

“The mismatch on where the Biden Pentagon team and the Navy-Marine Corps [stand], that’s the source of that tension,” said one person with knowledge of the internal discussions, who, like others, asked for anonymity to speak candidly about the debate. “[Hicks’] thesis and where she thinks the department needs to go does not necessarily involve a Navy with larger numbers.” 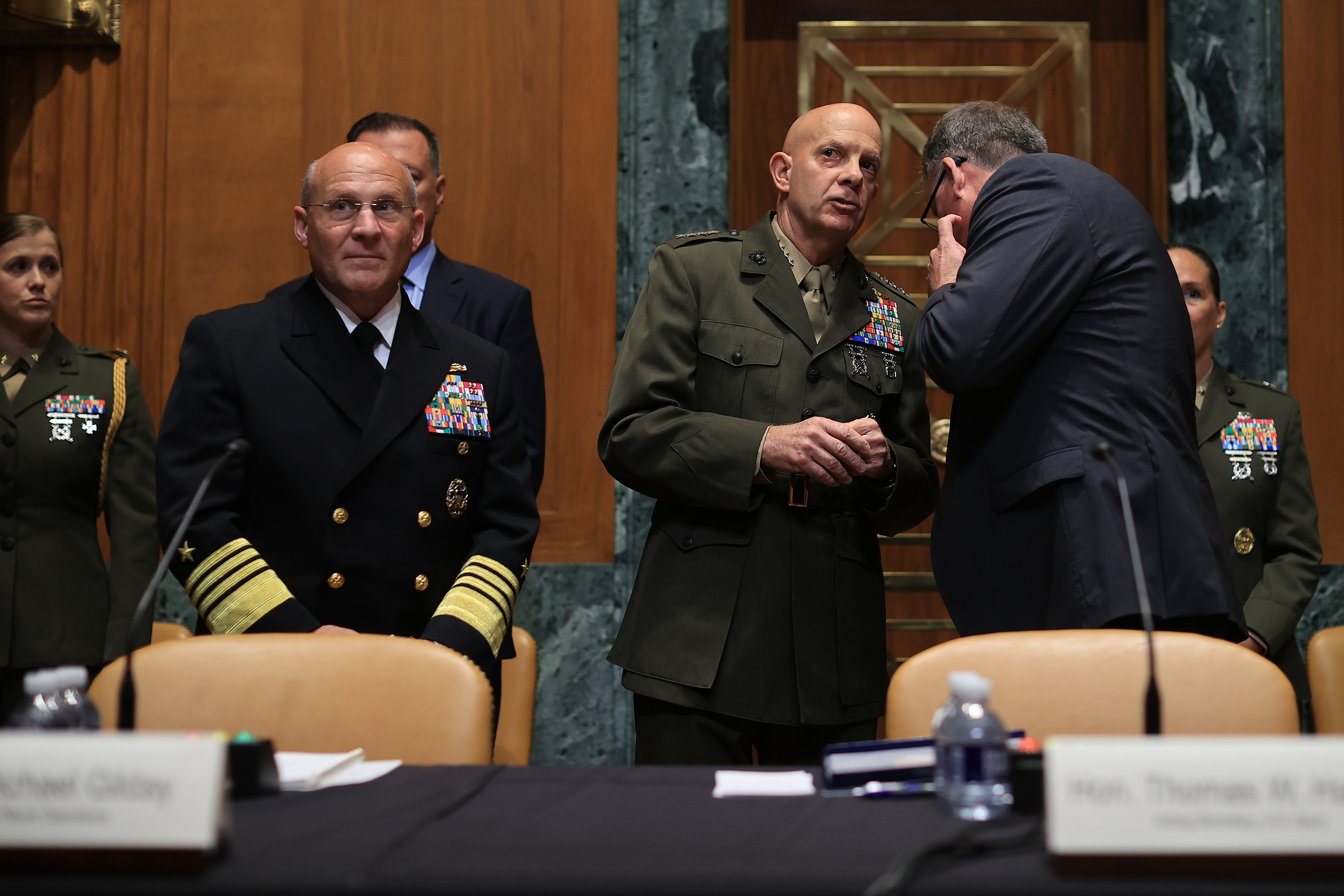 There is friction not just between the Navy and Pentagon leadership, but within the service as well. The Marine Corps’ plan for the light amphibious warship was pushed out of the Navy shipbuilding budget two years in a row. The fiscal 2023 budget request shows the new ship being funded in fiscal 2025 — after Berger is slated to retire.

The move also throws cold water on Berger’s plan to give units of 75 Marines the flexibility to carry a wide range of weapons with them at sea, including anti-ship missiles, drones and supplies to rearm friendly forces.

That ship, however, is the cornerstone of the Marine Corps’ modernization priorities. The Marine Corps envisions using the light amphibious warship to ferry Marines from beach to beach while hiding in plain sight, as the new vessel is the size of other commercial ships.

The plan also has implications for the shipbuilding industrial base. Since the size of these vessels is smaller compared to traditional amphibs, that opens the door for more prospective builders, including companies that are not equipped to build large military vessels, to bid on the contract.

Complicating matters is the fact that the Biden administration has yet to put forth a nominee for the top Navy acquisition job, which is currently held on a temporary basis by Tommy Ross. Del Toro recently moved Ross, his former chief of staff, out of his front office because the two do not see eye-to-eye on the future of Navy shipbuilding, two former DoD officials said.

Instead, Ross was relocated to the acquisition job where he does not have authority to sign off on major deals, the two people said.

Ross is more aligned with Hicks’ vision for the fleet, the people said.

“There is tension between Carlos and Tommy Ross and by extension between Del Toro and Kath Hicks,” said one former Pentagon official familiar with the discussions. “Del Toro wants to go a different direction and he feels like he’s being constrained by Kath Hicks.”

Still, in his temporary role Ross does not have acquisition authority and is overseeing the Navy’s $140 billion portfolio by name only, according to two internal memos announcing the changes.

“I reserve the right to exercise any and all of the authorities temporarily assigned to you,” Del Toro wrote in a May memo announcing Ross’s new title.

Instead that authority rests with Ross’ deputy, Jay Stefany, a 37-year career Navy civil servant who entered the senior executive service in 2012. He is cleared to award contracts over $100 million to a single vendor and approve contracts in the $100 million to $500 million range that bypass the traditional acquisition process using what’s known as other transaction authority.

The differing views inside the Pentagon on the future of Navy shipbuilding is not a bad thing, but leadership must come to a consensus, according to one of the people. What they decide will set the tone for the industrial base, the person added.

But what is concerning, once a path is chosen, is that the Navy lacks a Senate-confirmed acquisition executive to engage with industry to carry out the plan, the person said.

In the end, Congress will have the final say over how large the Navy budget is and how many ships it can afford. While the Hill looks to pump tens of billions into President Joe Biden’s latest defense budget, the Navy is hardly in their good graces given massive cost overruns and schedule slippages on new ship programs over the past 20 years.