Is Nixon the Proto-Trump? Don’t Ask the 29-Year-Old Custodian of His Legacy 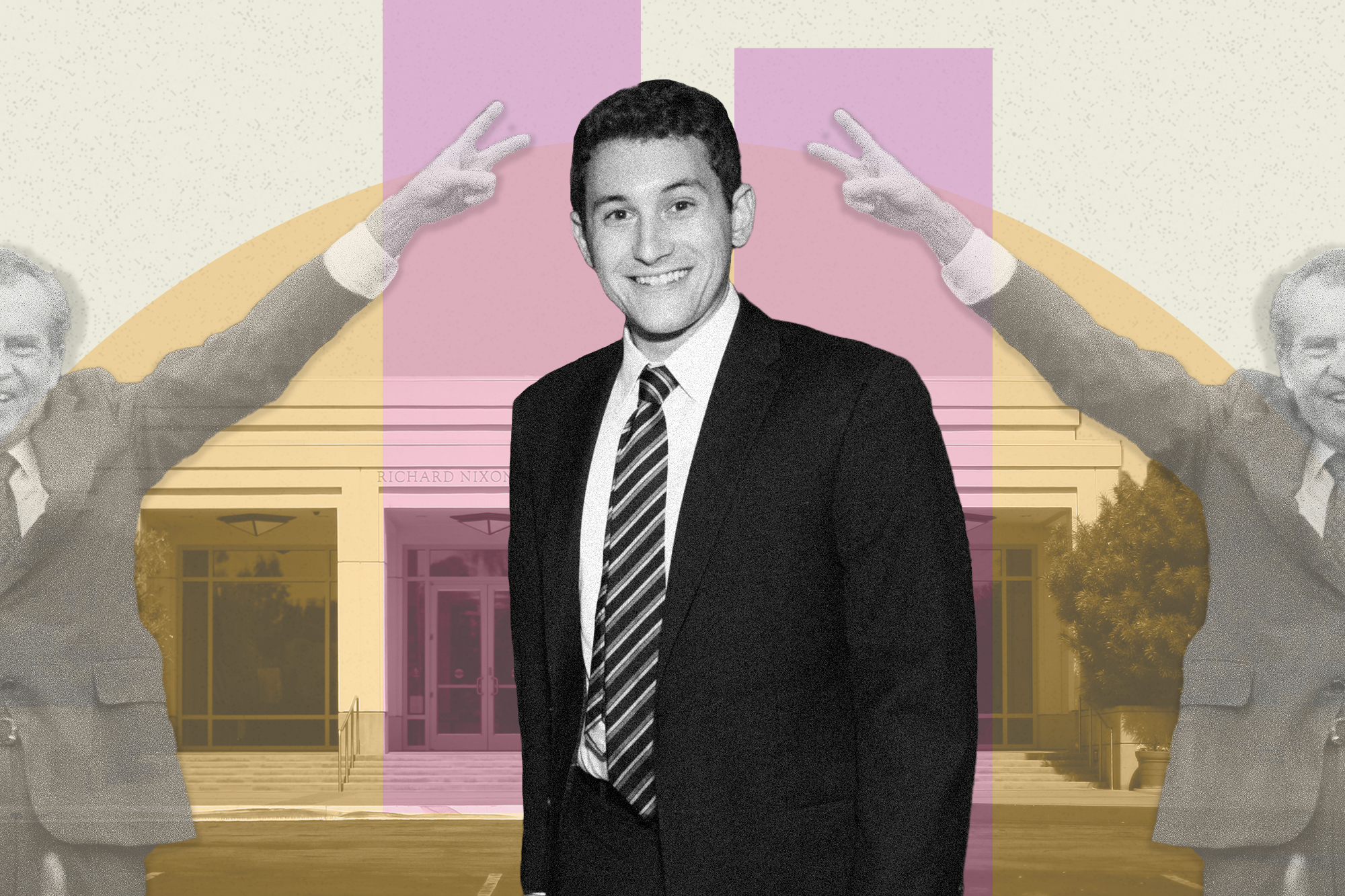 In 2007, Jim Byron, a 14-year-old history buff from Orange County, Calif., was searching for a summer job when he came across a marketing internship at the Richard Nixon Foundation in nearby Yorba Linda. He applied for the job and accepted an offer — but not because he had any great affinity for Nixon.

“It was just geographical proximity,” says Byron of his introduction to the foundation, which runs the Nixon Library and Museum. “I needed a place to intern and a place to work.”

Fifteen years after taking his first job at the foundation, Byron’s still there. At 17, while still in high school, he took a job in the marketing department; at 22, after graduating from nearby Chapman University with a degree in business administration and a minor in history, he joined the foundation’s staff full time. Last year, at 28, having climbed the institutional ladder to executive vice president, he was elected as the foundation’s president and CEO by a unanimous vote of the board of directors, succeeding conservative bigwig Hugh Hewitt. Over that time, he says, what started as a summer job has developed into a deep interest in Nixon’s life and legacy. 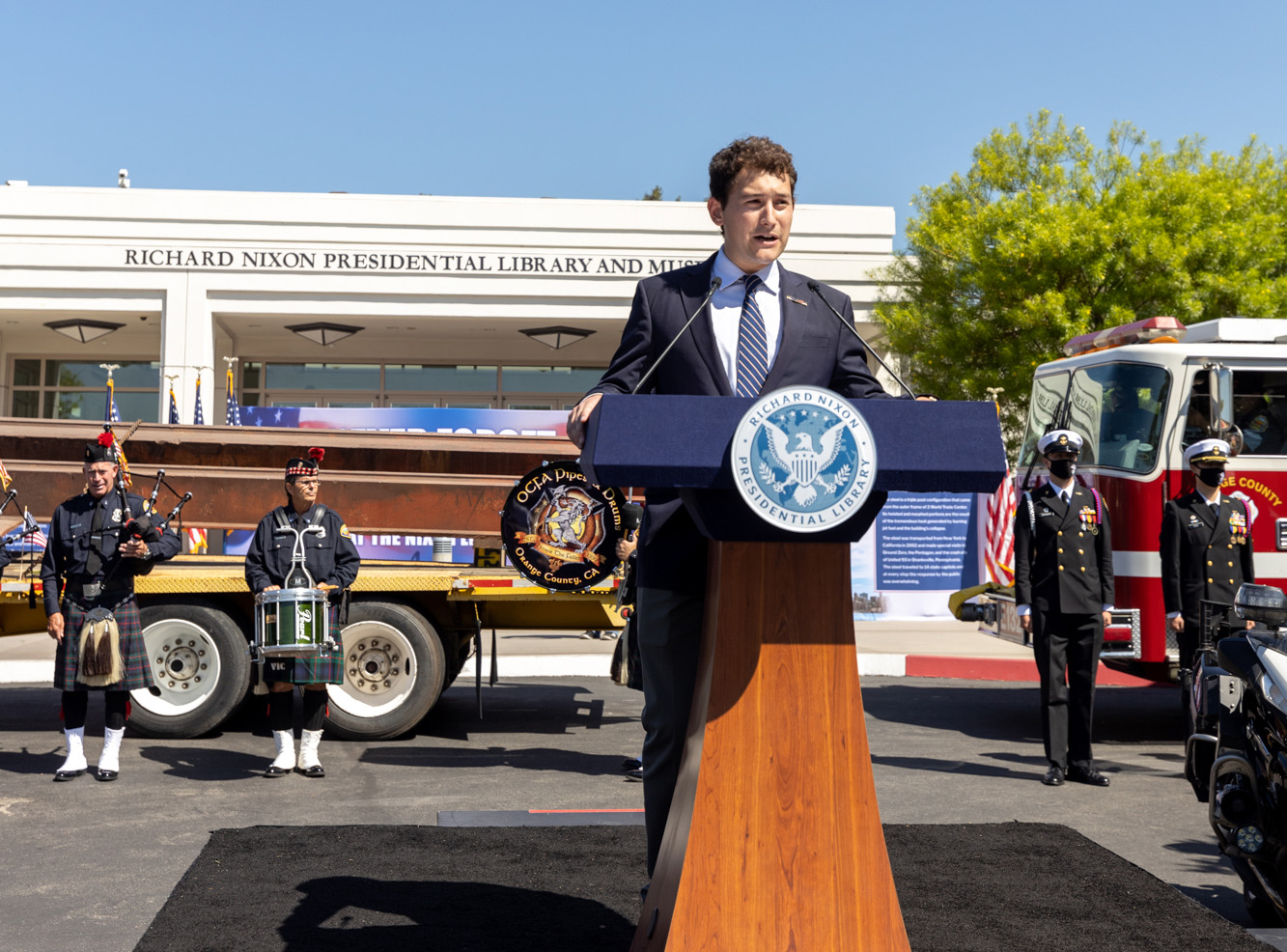 Now, this 29-year-old, who was born in 1993, the year before Nixon died, is the unofficial custodian of the 37th president’s legacy, responsible for applying the “vision of President Richard Nixon to defining issues that face our nation and the world today,” as the foundation’s mission specifies. Sifting through the ash heap of history for contemporary lessons is a challenging task under the best of circumstances, but it is particularly difficult in the case of Nixon, whose heap is larger — and more politically radioactive — than most.

Today, though, Byron’s job is trickier than ever — thanks in large part to Donald Trump. The contest over Nixon’s legacy has heated up once again due to the 50th anniversary of the Watergate break-in, which fell on June 17 — coinciding with the House’s inquiry into the January 6 riots and Trump’s unsuccessful attempts to overturn the 2020 election. With the House hearings looming in the background, the discourse over Nixon’s role in history is increasingly being filtered through the debate over January 6, giving rise to a tidal wave of comparisons between Nixon and Trump.

For the keepers of Nixon’s legacy, these comparisons raise a difficult question: Given Americans’ deeply polarized views of Trump, does the association with the 45th president harm or help Nixon’s memory?

This is, apparently, not a question Byron is eager to answer.

On the phone, Byron gives off what can only be described as extremely strong College Republican vibes — polite, well-spoken and almost painfully earnest in his regard for American political history. Photos of Byron from the Nixon Foundation website show him as a clean-cut 20-something with a crop of curly dark hair, beaming at the camera next to various wrinkled Republican luminaries such as Dick Cheney and Henry Kissinger. In our conversation, he professes a genuine passion for studying the finer points of Nixon’s biography.

“When I started reading about Richard Nixon and his life, I found him just fascinating as an individual,” Byron tells me. “It became clear that he did a lot over the span of a nearly 50-year career to influence my life and, I think, the lives of all Americans.”

It’s an unusually sympathetic take on Nixon, especially coming from a 29-year-old like Byron, whose fellow millennials — if they know Nixon at all — are likely to know him as a symbol of everything that went wrong in American politics during the second half of the 20th century: the shattering of faith in the country’s governing institutions, the realignment of the Republican Party behind an explicitly racist electoral strategy, and the deepening of Cold War-era political repression both at home and abroad. 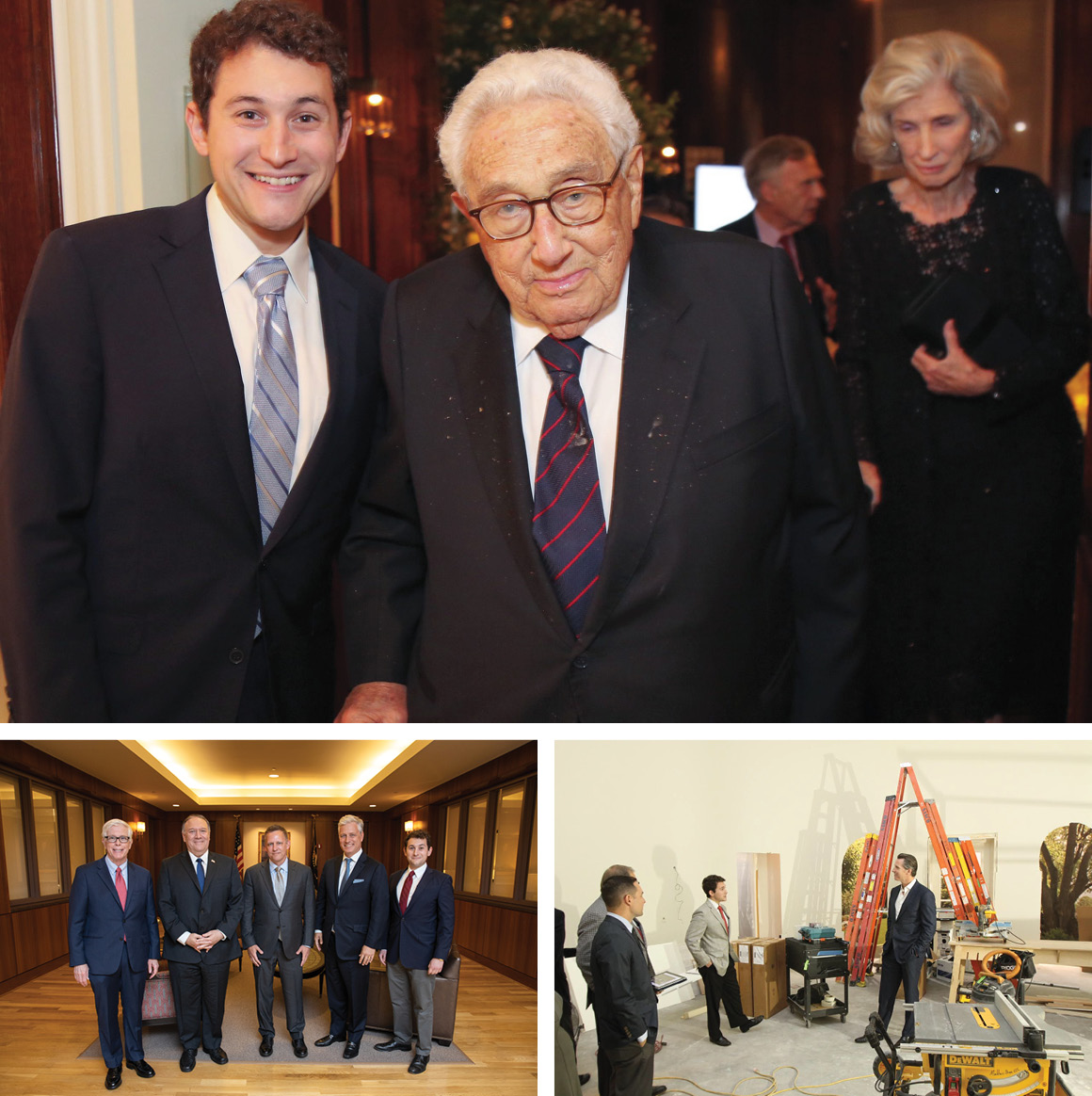 For Byron, though, these elements of Nixon’s tenure form only one small part of the former president’s multilayered legacy.

“There’s a lot to the Nixon story and legacy, and you have to look at the totality of his life,” Byron says, sounding a bit like a used car salesman trying to redirect a buyer’s attention away from the rusted-out parts of a broken-down clunker. “I think that when one looks at it in that way, you see a 50-year career that, in many ways, is inspirational — he never gave up.”

The story that Byron does want to tell about Nixon doesn’t shy away from Watergate, but it doesn’t dwell on it, either. In Byron’s telling, Watergate was “a bellwether of changing times in America” and a window into the “cultural and ideological changes and clashes that began to reshape, redefine and divide society.” But more importantly, says Byron, Watergate is a way into discussing the other, potentially more flattering elements of Nixon’s tenure.

Admittedly, Byron’s attempt to reframe Watergate as just another element of Nixon’s legacy can lead to some strange contortions.

“When it comes down to it, people are interested in President Nixon because of Watergate,” Byron adds. “And that’s good, because his legacy is so vast and so consequential.”

Despite Byron’s desire to tell Nixon’s story on his own terms, the comparison between Trump and Nixon has become impossible to avoid. In the Washington Post last month, Bob Woodward and Carl Bernstein, the famed journalistic duo that first broke the Watergate story for the Post in 1972, published a lengthy piece juxtaposing Watergate and January 6, noting that after Nixon, they never expected to see another “president who would trample the national interest and undermine democracy through the audacious pursuit of personal and political self-interest.” “And then along came Trump,” they wrote.

When asked about the steady stream of comparisons between Nixon and Trump, Byron demurs. 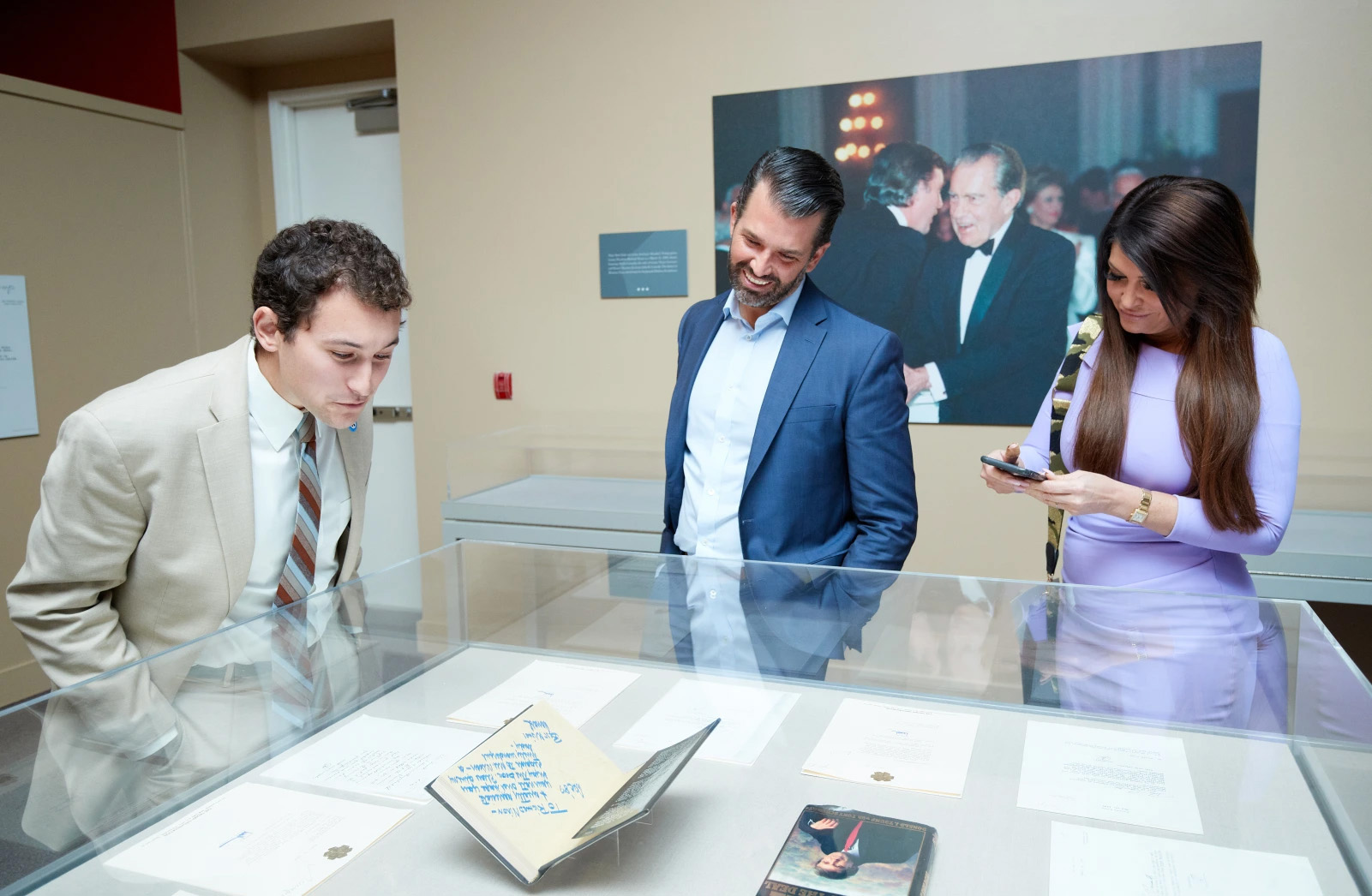 “I’ll leave that to the historians and the political pundits to draw the comparisons,” he says. “My job is to tell the story of what actually happened and what he actually did.”

Byron’s self-consciously scholarly attitude notwithstanding, the Nixon Foundation has occasionally entertained — if not coyly invited — comparisons between Nixon and Trump. In 2020, for instance, the library hosted an exhibit featuring a series of chummy letters that Trump and Nixon wrote to each other during the 1980s and early 1990s. In one of the letters, Trump invited Nixon and his wife to live in Trump Tower in Manhattan — an invitation the Nixons declined. In another, Nixon commiserated with Trump over the “massive media attacks” that Trump was subject to. At one point, Nixon wrote to Trump to share his wife Pat’s appraisal of Trump’s political potential: “As you can imagine, she is an expert on politics and she predicts that whenever you decide to run for office you will be a winner!”

Byron defends the exhibit as a valuable contribution to the public’s understanding of the private lives of America’s political leaders: “The fact that President Nixon and future-President Trump had this relationship — this friendship, arguably — added to our understanding of how leaders interact with each other in private,” Byron says. Yet it’s not hard to see the exhibit — which opened in the middle of the 2020 election and garnered a visit from the president’s son, Donald Trump Jr. — as an attempt to tether Nixon’s legacy to Trump’s political fortunes.

In the wake of January 6, though, this comparison has become politically fraught for Nixon’s defenders: to associate Watergate with Trump is, in the eyes of many, to underscore the severity of Nixon’s crimes. At the same time, it’s also clear why Byron is not quick to entirely disavow the analogy. For one thing, the comparison with Trump might actually make Nixon look not so bad. Nixon didn’t foment an insurrection, and he resigned when the full extent of his criminality came to light. 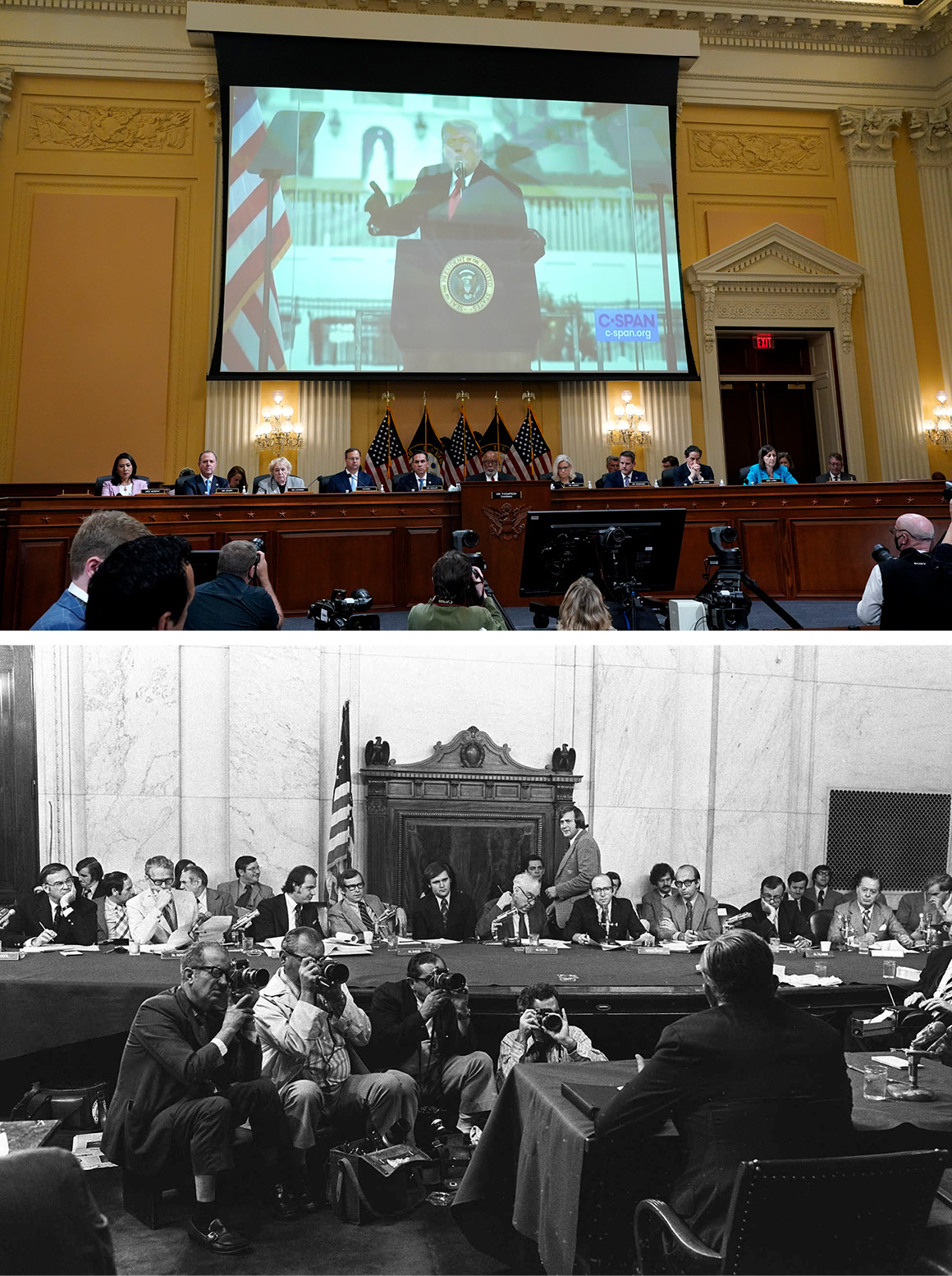 Of course, it’s too early to know how history will judge Trump and January 6 — and whether that judgment will create an opportunity to reevaluate Nixon and Watergate. Still, I ask Byron whether the comparison between Nixon and Trump has become such an integral part of Nixon’s legacy that the foundation has a responsibility to address it, less as a matter of political posturing and more as a matter of academic integrity.

“Any comparison, any association — those are good things for the Nixon legacy,” Byron says. “They increased interest in President Nixon.” 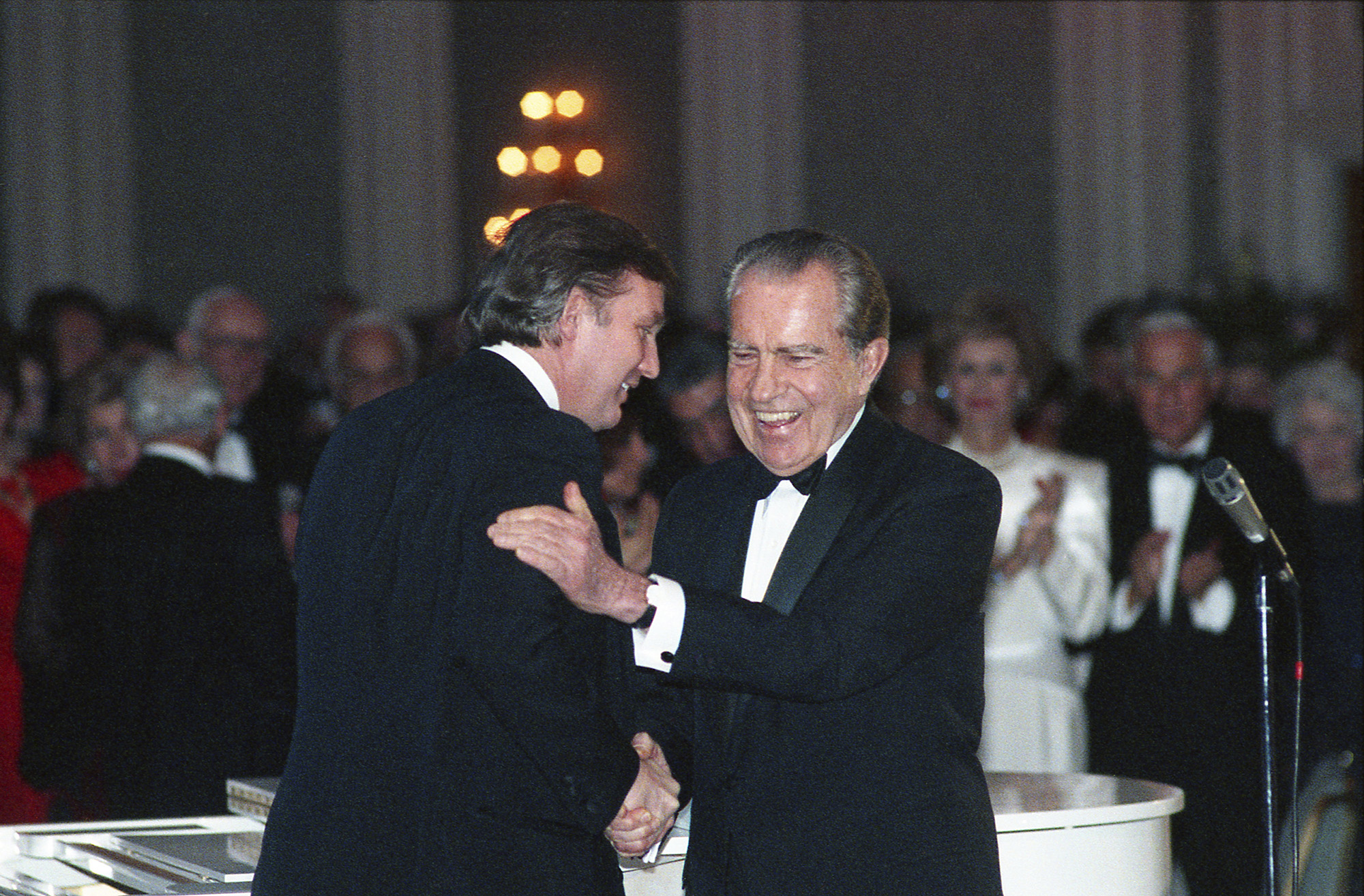 Our call ended there, but a few minutes later, Byron, apparently dissatisfied with the conclusion of our conversation, called me back to clarify his final answer.

“My point is that anything that increases interest in President Nixon is a good thing,” Byron repeated.

I thanked him and we hung up again. But I couldn’t help but wonder: Really? Anything?