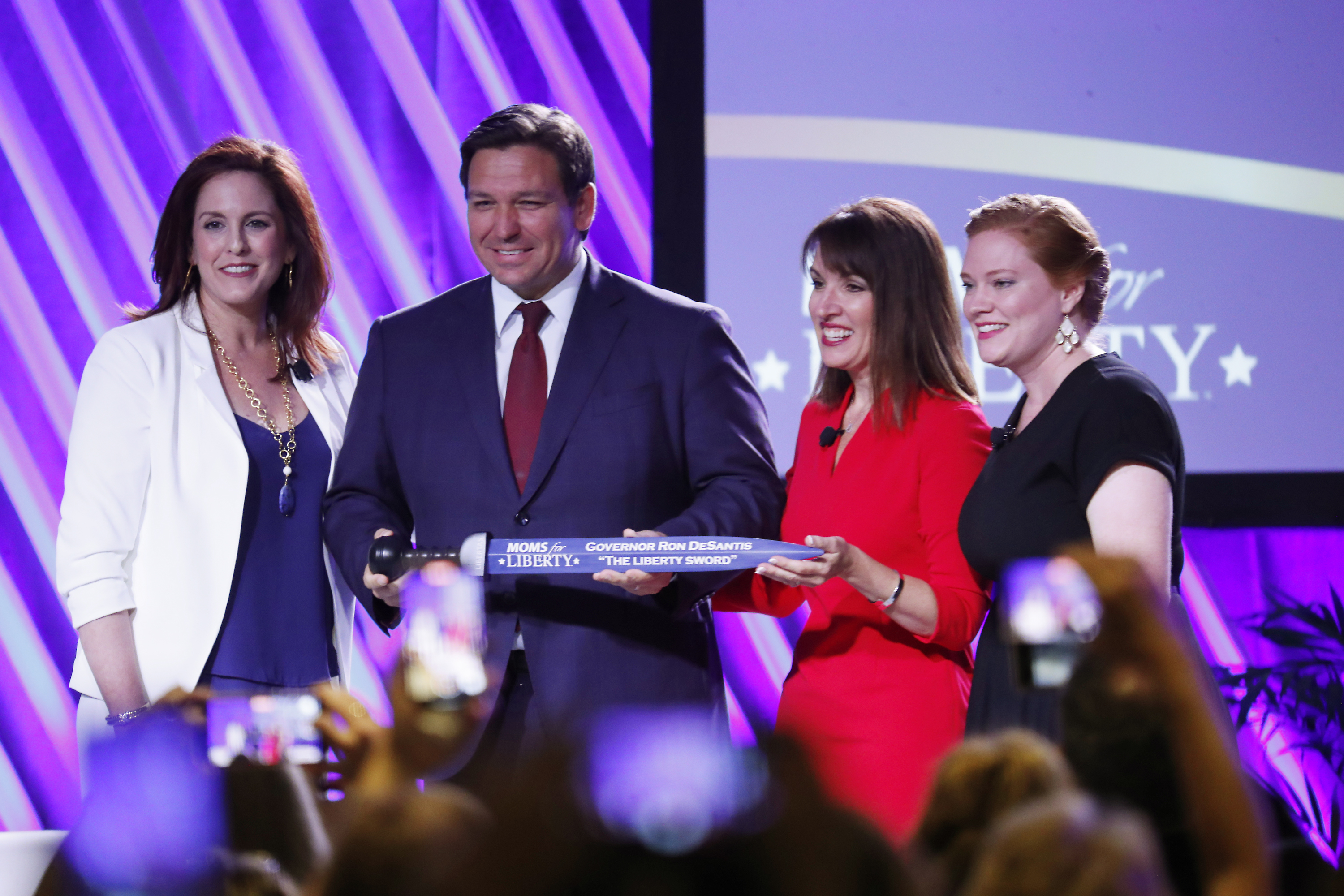 It was all part of the first ever summit thrown by the conservative group Moms for Liberty, providing a glimpse into the growing contentious education movement in Florida and the nation.

Hundreds of parental rights advocates descended upon downtown Tampa this week for the three-day event, which offered attendees seminars on subjects like gender ideology and social emotional learning while also attempting to inspire and train possible school board candidates.

Winning school board seats proved to be a critical goal among parents at the summit. Many had grown frustrated by local policies — especially pandemic rules such as masking students and distance learning — and for Gov. Ron DeSantis, who encouraged attendees to withstand the political pressure from woke corporations and elsewhere as Friday morning’s special guest.

Polarizing education issues have emerged as huge motivators in electoral politics in recent years, highlighted by Virginia GOP Gov. Glenn Youngkin, who tapped into parental frustration and anger over Covid-19 rules and how race is taught to beat his opponent last year. DeSantis too has consistently touted parental authority in education and has strenuously defended Florida’s “Parental Rights in Education” law, labeled as “Don’t Say Gay” by opponents, which bans teachers from leading classroom lessons on gender identity and sexual orientation for kids in kindergarten through third grade.

Some 500 people, mostly mothers and some grandmothers, attended the “Joyful Warriors” Tampa summit. Some attendees wore Moms for Liberty-branded gear and carried signs declaring that “We do not co-parent with the government” and “Mamas for DeSantis” in what was heralded as the “year of the parents.”

The breakout panels were closed to media but touched on a range of topics central to the group’s conservative stance, including a legal forum about the rights of parents and students, one on “enforcing” First Amendment rights and a “look behind the education curtain,” which was led by Moms for Liberty founders Tiffany Justice and Tina Descovich — both former Florida school board members. Others scheduled to speak at the summit include Sen. Rick Scott (R-Fla.) and Betsy DeVos, the education secretary under former President Donald Trump.

Since launching in Florida in 2021 amid the pandemic, Moms for Liberty has exploded in growth and is closing in on 100,000 members nationwide. The group is known for being vocal at school board meetings, pushing back against policies they perceive as liberal in schools and supporting the removal of LGTBQ-themed books in libraries.

The moms flocked to Tampa from all over the U.S., including Joy Gjersvold, who leads a Moms for Liberty chapter in Kitsap County, Washington.

Like many others, Gjersvold was inspired to get more involved in education by the pandemic — the closing of schools in her area, a “lack of preparedness” to go virtual, masking and vaccination requirements for students and teachers. Gjersvold found out about Moms for Liberty through a Facebook post and last August founded a local offshoot in Kitsap, which spans five school districts in Western Washington.

In the time since, the group has expanded to include an executive team and district “captains” — parents who keep everyone posted on education happenings in their district. The group sees about 12-20 people at their regular meetings, Gjersvold said.

“It spoke to me,” Gjersvold said in an interview. “I realized, with a daughter who is still in high school, I had to do something.”

DeSantis and school board endorsements

At the event, DeSantis spoke for roughly an hour to a very receptive morning crowd. They cheered his policies attempting to rid Florida of any critical race theory in lessons and booed Walt Disney Co. for opposing the state’s Parental Rights in Education bill.

“I have a five-, a four- and a two-year-old, so maybe I’m a little bit more sensitive about this,” DeSantis said. “But I think parents in this country should be able to have their kids go to school, watch cartoons — just be kids — without an agenda shoved down their throat.”

The Republican governor’s appearance came just a day after he endorsed a second round of local school board candidates, doubling the list of candidates who have his backing in their races. This year, dozens of political committees linked to conservatives are sending droves of cash and clout to their candidates of choice as state Republicans become more involved in education after a dozen school boards bucked the DeSantis administration by requiring students to wear masks in schools last fall.

The effort by DeSantis will also help Florida Republicans control nearly all positions of government in the state, from the governor’s mansion and Legislature to school boards in small countries.

DeSantis questioned how a Republican-leaning county, such as Sarasota, could have a school board “that is fighting tooth and nail to mask kids against their will,” saying that “parents now realize that these are really significant elections.”

He even singled out one candidate he endorsed from the crowd, Alysha “Aly Marie” Legge, who is running for a seat in Hillsborough County, one of school boards that challenged DeSantis and Republicans during the pandemic.

“That school board needs some work,” DeSantis told the audience. “If we left it to that school board, those kids would have been locked out of school for a long time.”

While the moms gathered at their hotel, Florida Democrats were just a short walk away in a neighboring JW Marriott for an event featuring their major fundraising annual gala, separated only by a bridge between the two buildings. Democrats dedicated some of their time in Tampa firing back at DeSantis and the policies backed by Moms for Liberty, claiming the group has “AstroTurf” roots instead of being a grassroots effort, pointing to conservative groups that sponsored their summit, including the Heritage Foundation and Turning Point USA.

Democrats alleged that a “silent majority” of voters who support their local schools would overpower the “vocal minority” of Moms for Liberty.

“It isn’t about the kids — it’s about an obsession with power,” Diaz said.

Yet Moms for Liberty is clearly inspiring parents to take action locally as the movement continues to expand.

In Washington, for example, Gjersvold said there are 15 local school board seats up for reelection soon that the local Moms for Liberty group is targeting.

“There are red voters — there are conservative voters — who know what is happening is wrong,” Gjersvold said. “We need to empower them to have a voice.”