Opinion | Both Parties Are Getting It Wrong on Parental Leave 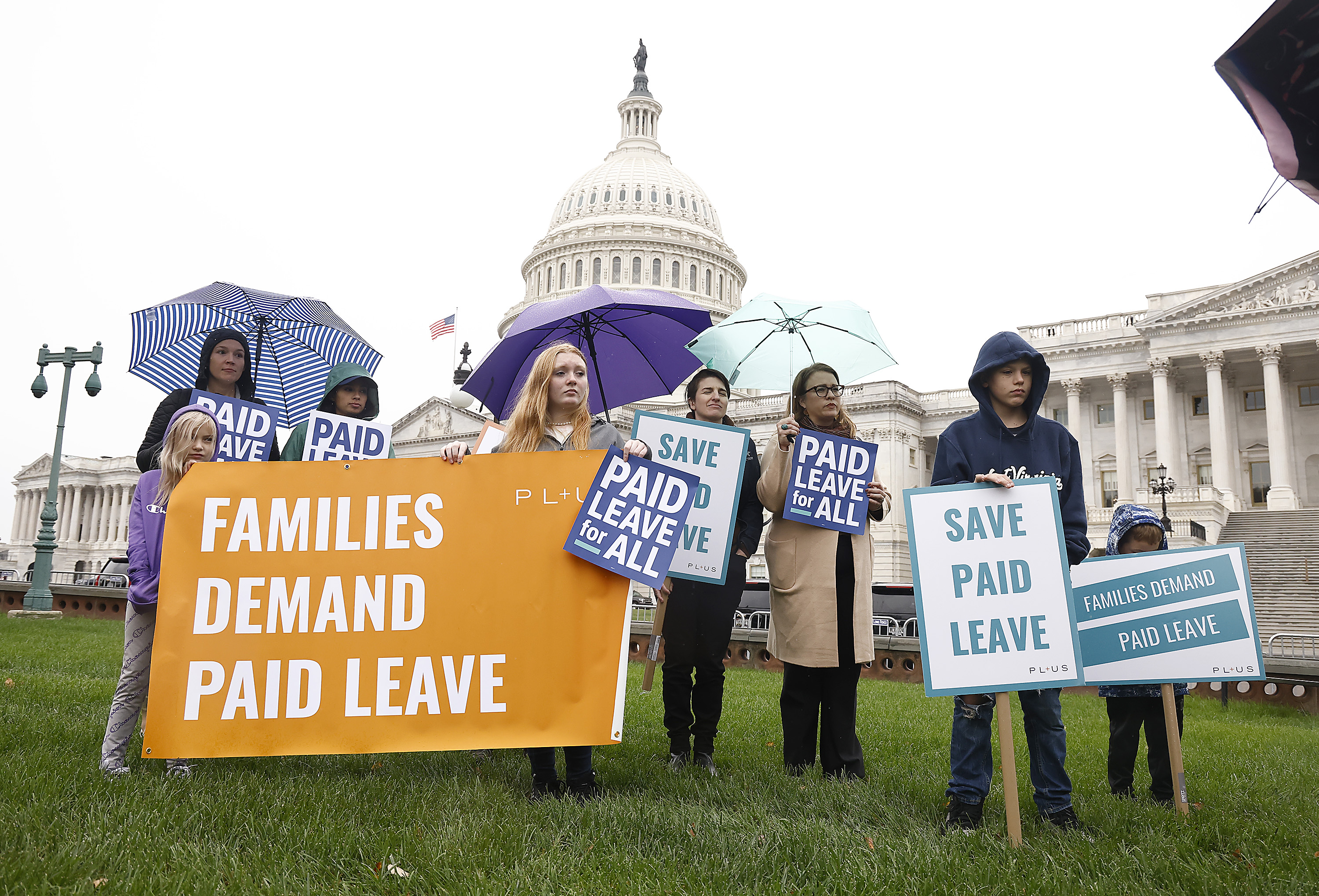 In the last few years, paid parental leave proposals have proliferated in Congress. That’s a positive development, as it’s a gaping hole in the American social safety net. Over seven million parents welcome a new child into the world annually and the vast majority of them do not have access to any leave benefits. Unfortunately, all the plans have been awful.

It is not difficult to design a good national parental leave program that provides time off and a bit of cash to all new parents based on their prior income. It is as simple as slightly increasing the Social Security payroll tax and then instructing the Social Security Administration (SSA) to provide all new parents with a few months of cash benefits equal to a high percentage of their usual weekly earnings or a decent minimum benefit.

But because of politics, ideology or simple corporate influence, every parental leave proposal that makes its way into Congress ends up as a complicated mess that features cruel eligibility exclusions, inadequate income replacement, unworkable funding mechanisms or giveaways to private insurance companies.

Both parties are at fault here. These flaws can be found in Democratic proposals such as the Build Back Better (BBB) Act provisions crafted by Rep. Richard Neal as well as Sen. Kirsten Gillibrand’s FAMILY Act; a Republican plan introduced by Sens. Marco Rubio and Mitt Romney known as the New Parents Act; and a bipartisan unnamed plan from Sens. Bill Cassidy and Kyrsten Sinema.

With BBB now in rubble, the odds are slim that Congress will pass a paid parental leave bill this year. But the debate happening now will undoubtedly shape whatever consensus is ultimately formed, so these bad bills need to be rejected now.

With the exception of the Cassidy-Sinema proposal, all of the parental leave bills in the current Congress use work history requirements to exclude a large minority of new parents from benefit eligibility. Under Gillibrand’s FAMILY Act, parents are only eligible for benefits if they have worked for 1.5 years, half of the time since their 21st birthday, and in the 12 months prior to giving birth. In BBB, parents need to have worked at some point in the few months leading up to birth and earned at least $2,000 in the preceding two years. In the Rubio-Romney New Parents Act, parents need to have worked for at least 2 years.

Unlike the other three measures, the Cassidy-Sinema proposal ostensibly makes all new parents eligible but in so doing fails to scale the benefit amounts to the parent’s prior earnings. Under that plan, new parents would be given a total of $5,000 to be split between them that they will subsequently have to pay back by foregoing $5,000 of Child Tax Credit benefits. For a two-parent family where both parents earn the average wage of $58,000, this benefit would replace less than 2.3 weeks of their earnings. Above-average earners would receive even less income replacement.

In addition to failing at income replacement, the Cassidy-Sinema proposal also makes no sense as an administrative matter, which perhaps explains why it is the only plan that has no accompanying bill text. Child Tax Credit eligibility is redetermined every year based on the income of the household that the child resides in. Families with very low or high incomes are not eligible for the CTC and so it is unclear how they would pay back the benefit they received. Children often move between households from year to year, whether due to divorce, family instability or otherwise. In these scenarios, the person who receives parental leave benefits under the plan is not the same person who is eligible for the subsequent years of CTC benefits, which also makes it hard to understand how paying back the benefit would actually work.

Like the Cassidy-Sinema plan, the Rubio-Romney New Parents Act also relies on parents paying back the benefits they received in order to finance the program. But in the New Parents Act, this is accomplished by docking parents’ Social Security checks when they retire.

Making people poorer in retirement in proportion to the number of children they have is strange, especially if you believe, as bill sponsor Marco Rubio does, that parents are already “double-charged for federal senior entitlement programs” because they both pay into them directly and undergo huge personal costs to raise up the next generation of workers that keep the programs afloat for parents and non-parents alike.

But even more bizarre than trimming Social Security checks to finance the program is the provision of the New Parents Act that requires the SSA to recover the leave benefits paid to parents who die before retirement by going after the deceased parents’ estate. Requiring surviving spouses and orphaned kids to pay a deceased parent’s leave benefits back to the government is as cruel as it is unnecessary.

Despite their other problems, the Republican paid leave plans do have the charm of proposing fully public benefit programs, which save money and complication by avoiding duplicative, for-profit administration. The same can’t be said for the BBB leave plan championed by Richard Neal. In that plan, rather than have a simple federal program that covers everyone, Neal constructed a byzantine hodge-podge of subsidies for employer-provided private paid leave insurance and subsidies for state paid leave plans with direct federal benefits only available residually to those not otherwise covered by one of those plans. This design, which more or less mirrors the extremely dysfunctional U.S. healthcare system, would waste money paying out profits to private insurance companies while creating confusion and paperwork nightmares for many parents trying to access their benefits.

There are varied reasons why each of these proposals is so flawed.

In the case of BBB, it could be the usual money-in-politics style corruption: Neal receives a lot of money from the insurance lobby, which stands to benefit from a huge expansion of government-subsidized private paid leave insurance.

For Cassidy-Sinema and the Rubio-Romney New Parents Act, a misguided obsession with creating a deficit-neutral parental leave benefit without raising taxes has pushed the drafters to create what are essentially parental leave loans but with strange payback schemes that obscure the benefit’s debt-like characteristics.

With Gillibrand’s FAMILY Act, the main problem with the program — a steep work history requirement that excludes one in three new parents from eligibility — may have been caused by thoughtlessly copying the work history requirements for the Social Security Disability Insurance (SSDI) program. SSDI benefits are generally needed by older Americans who become disabled before retirement while parental leave benefits are generally needed by younger Americans who have just joined the workforce or, in some cases, are still getting their education. These differences make the SSDI work history requirement clearly inappropriate for a parental leave benefit.

What’s remarkable about how bad all of these proposals are is that their problems are so easy to fix. In some policy areas, badly designed programs are the result of difficult decision-making and navigating powerful interests and entrenched constituencies. With parental leave, the policymakers are essentially starting from scratch. There is no good reason why an ideal leave program — i.e. one that is publicly-administered, inclusive of all new parents, provides scaled income-replacement, has a decent minimum benefit, and does not need to be paid back — could not be implemented.

Yes, it would mean raising taxes, but only by a tiny amount: Washington, D.C.’s paid leave program, which includes both parental leave and medical leave, is funded by a 0.26 percent employer payroll tax, more than a standalone parental leave program would cost. That’s all it takes to create simple, popular programs.

Lawmakers in both parties seem hellbent on much worse approaches, but it’s not too late to get it right. Doing so would deliver not only much-needed help to the public but likely a major political win to whichever party can figure it out.