The Supreme Court’s overturning of Roe v. Wade inspired an outpouring of grief, anguish and political opprobrium from feminists and abortion rights supporters. Take the following, for example:

“We are literally going backwards in time. It makes no sense how anyone thinks it’s their right to tell a woman what to do with her body. I just don’t get it… At what point do you look at the Constitution and say, hey this was written by people who had slaves, and maybe not everything is exactly to a tee in the Constitution?”

Is that the bullhorn pronouncement of a NARAL organizer? An AOC Instagram monologue? A particularly impassioned podcast intro from the “Pod Save” crew? Sorry, that’s not right: It’s Dave Portnoy, the media mogul and Barstool Sports president better known for his viral pizza reviews, unrepentant aggro-masculinity and social media trolling than for pro-choice activism (or, for that matter, critique of originalist legal theory).

Last summer, I wrote about how Portnoy’s particular brand of transgressive boorishness served as an inspiration to Republican politicians eager to capitalize on the backlash to newly established progressive social norms around things like gender pronoun usage and diversity, equity and inclusion practices. But that alliance was never ideological — it was aesthetic. To a certain kind of secular, mostly apolitical Barstool bro, the party of evangelical pro-lifers might not have been an ideal fit, but it was certainly more appealing than the party of “woke” scolds and stuffy bosses across the aisle.

Now that the Supreme Court has handed social conservatives their most significant ideological victory of the modern political era, those voters will have to choose: Is it worth giving sanction to an overtly religious, mostly unpopular political project simply to own the libs? Portnoy himself explicitly says no. But cultural backlash is as unpredictable as it is powerful, and its place at the heart of the modern GOP means that how a particular type of independent, attitudinally conservative voter responds could shape America for years to come.

To look at the empirical evidence — in so much as it exists — around opinion on abortion rights, one might think that Republicans’ victory over Roe is somewhat Pyrrhic. The most recent data from the Pew Research Center, collected at the beginning of July after the Dobbs decision, shows that 57 percent of the population disagrees with the decision itself (including a not-insignificant 29 percent of Republicans); the only group expressing overwhelmingly strong approval is white evangelicals. Sixty-two percent of Americans say abortion should be legal in “most” or “all” cases.

But dig deeper into the data and you’ll find that support for abortion varies considerably based on the duration of pregnancy, especially taking into account voters’ geographic distribution. There are also, of course, the inherent limitations of public opinion polling, as well as the relative rarity of single-issue voters (among whom anti-abortion voters outnumber their counterparts). It’s not quite accurate to say the GOP has summarily alienated an electorate that otherwise seemed prime to embrace it in this fall’s midterms.

So one might look to another indicator, albeit one lacking the veneer of empiricism that polling maintains: The opinions of thinkers and leaders in the conservative movement. What actual politicians say is unreliable, as beholden as they are to pesky primary voters and wealthy, ideological donors. What about those responsible for curating the vibes of the modern conservative movement?

At the beginning of June, the National Review fellow and social-conservative wunderkind Nate Hochman wrote an op-ed for the New York Times titled “What Comes After the Religious Right?” In it, he expanded on the somewhat declinist view of the conservative Catholic writer Matthew Walther, who coined the term “Barstool conservative” in a 2021 op-ed for The Week — writing that, “While the old religious right will see much to like in the new cultural conservatism, they are partners, rather than leaders, in the coalition.” Hochman argues that although a figure as non-pious as Trump (who could plausibly claim the mantle of the Barstool president) might have empowered social conservatives, they’re too much of an electoral minority to succeed without their comparatively libertine coalitional partners.

Hochman’s insight invites a similar reflection from the other side of the aisle. Once upon a time, as the writer Matt Yglesias recently pointed out in response to Portnoy’s pro-Roe stance, chauvinistic bros were reliable Democratic voters, who made common cause with realpolitik-ing feminists willing to overlook the Clinton-era party’s affective cultural conservatism in exchange for political wins. Both were opposed to the Moral Majority-era sanctimony of the Reagan-Bush GOP, the ethos of the alliance perhaps best summed up by a notorious quote regarding Clinton from the former Time White House reporter Nina Burleigh: “I’d be happy to give him a blowjob just to thank him for keeping abortion legal. I think American women should be lining up with their presidential kneepads on to show their gratitude for keeping the theocracy off our backs.”

For various reasons beyond the scope of this essay, the salience of cultural politics has increased in American life to an extent that makes that alliance impossible. Conservative thought leaders now find themselves at the same crossroads liberals once did: What price are they willing to pay — what are they willing to sacrifice, or excuse — to keep such fickle, secular, Portnoy-like independent voters in the fold? 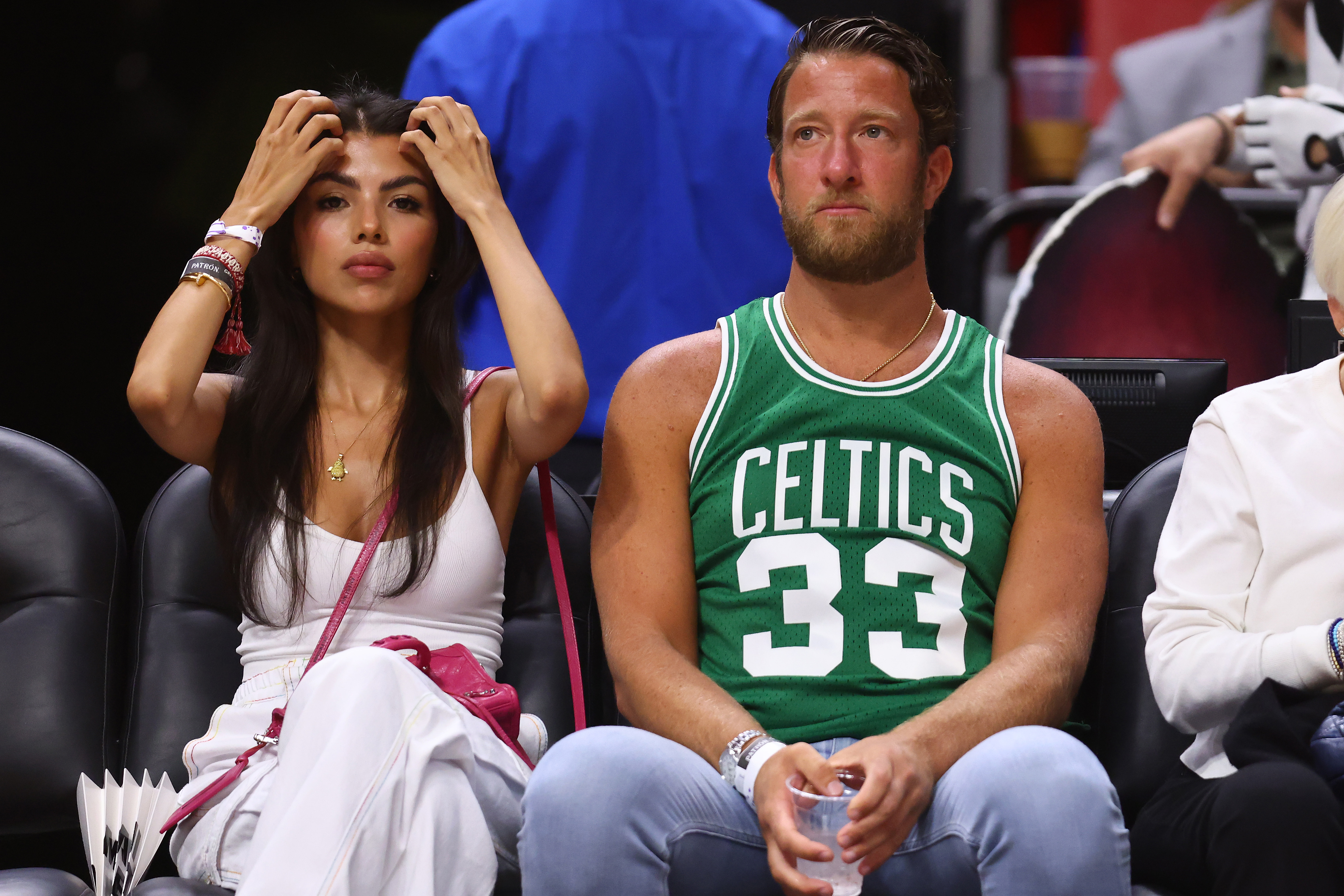 As the GOP’s most reliable and motivated voting bloc, the anti-abortion movement is clearly not going anywhere. To the chagrin and fear of liberals, and the hope of the would-be New Right, there’s some evidence that they might not have to. Looking at the replies to Portnoy’s initial post-Roe tweet, alongside the criticism from hard-right figures like Dan Bongino (as well as Hochman himself), one can see a slew of comments from average, non-blue-check-sporting Barstool fans, protesting that all the Supreme Court did was “let it be a state issue,” or that he should simply “stick to sports.”

This is where Barstool per se ceases to be a useful framework through which to understand the shifts occurring in American politics today. (As with any brand with as massive a reach as Portnoy’s, its fans are more ideologically diverse than a liberal’s snap judgment would assume.) The angst inspired by Portnoy’s pro-abortion rights turn reflects a much broader phenomenon: Just as secular and religious GOP voters are split, there’s an even narrower division among those who are simply alienated by the modern left and those who are outright anti-feminists, especially among young voters.

The anti-feminism of today’s young conservatives takes a few different forms. There is, of course, the outright hate spread on forums like 4chan and by trolls like Nick Fuentes; the casual, fratty misogyny of more mainstream figures like Trump White House aide Garrett Ziegler, who in a live streamed rant after his Jan. 6 committee testimony called his female former coworkers “thots and hoes”; and the faux-erudition of New Right leaders like Sen. Josh Hawley, who in a keynote address to the National Conservatism Conference decried the left’s “attack on men in America.” (It’s not just America, either: In South Korea, youth anti-feminism helped propel a conservative president to the Blue House.) Young anti-feminists see a world where women are at least notionally more empowered than ever, yet no one seems to be happy about it. They look to the past for solutions in lieu of inventing new ones for the moment.

And there are plenty of historical examples, both religious and secular, to draw from. In her 1991 book, “Backlash: The Undeclared War Against American Women,” the feminist writer Susan Faludi described a taxonomy of anti-feminist reaction to the advances of the Equal Rights Amendment era, from Christian leaders like Paul Weyrich who promised to “overturn the present power structure of the country” to the quasi-paganism of the poet Robert Bly, who encouraged “real men” to reclaim their cultural birthright by psychologically isolating themselves from women. Faludi sums up their shared philosophy as the belief “that the very steps that have elevated women’s position have actually led to their downfall.”

One might wonder what Faludi, in an era where Weyrich and Bly have inspired successors in figures like the (now-disgraced) megachurch pastor Mark Driscoll and the Canadian psychologist Jordan Peterson, would have to say about the backlash to women’s more recent advances. To borrow a rhetorical move from Woody Allen, whom Bly especially hated, we don’t have to wonder; I happen to have Ms. Faludi right here: Writing in the New York Times in response to Roe’s overturning, she argues that feminism’s growing entwinement with celebrity culture is a primary culprit in making it more vulnerable than ever to “a more pernicious backlash, one that has never relented, one that has brought us the calamity of the Alito draft opinion.”

This is why social conservatives find themselves at a moment of not just dog-that-caught-the-car peril, but potential promise. The Court’s ruling was only made possible by the combined forces of secular conservatism, via Trump’s mass heterodox appeal, and the decades of concentrated effort by a minority of religious activists. Like with Weyrich and Bly, or Driscoll and Peterson, anti-feminism can take many forms and have many motivations, but the basic ressentiment it taps into transcends religion, class or partisanship, and is stubbornly persistent. By subsuming life-or-death social issues under the auspices of “‘Lean In’ moments and social media slap downs over whether Taylor Swift is or isn’t a feminist,” as Faludi wrote, liberals and feminists have risked erasing the distinction in the public’s mind between serious material outcomes and such symbological slap-fights.

That possibility conjures a world where arguments about women’s health outcomes, or whether there’s a feminist case against abortion, or over pro-family Republican economic policies might become immaterial as abortion becomes an entirely different, more recognizably modern kind of culture-war issue. We simply don’t know yet whether the Barstool cohort of the modern GOP will look around at a post-Roe world and decide their party has gone too far. But if they don’t, and Trump’s coalition holds, it will be the most powerful symbol yet of America’s transition to a symbolic mass politics of cultural grievance.

Those politics still can have very real policy consequences, as millions of women in red states are now discovering. Improbable as it might seem, whether or not said consequences endure — or even spread — might depend on what occurs in the hearts and minds, and on the ballots, of men like Dave Portnoy.