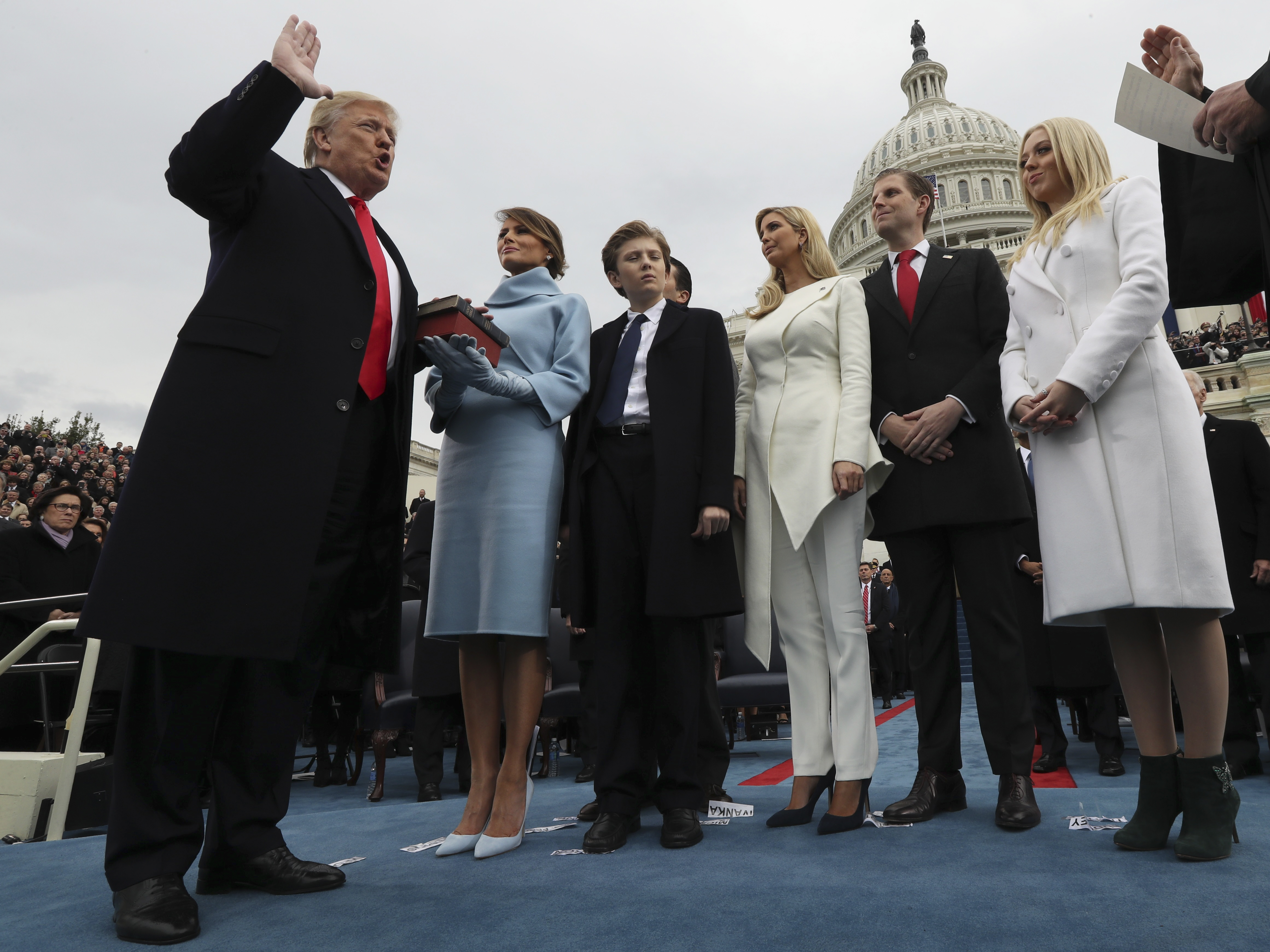 Spoilers first: When it comes to breaking news, “Unprecedented,” the new documentary series about the Trump family that’s streaming on Discovery Plus, is kind of a nothingburger. Despite the hype about deep access to Donald Trump and his three oldest children after the 2020 election — a possibility so tantalizing that it earned filmmaker Alex Holder a subpoena from the House committee investigating January 6 — there are few stunning revelations or exciting hot-mic moments. Yes, Holder sits down with the Trumps for extended interviews and trails them into campaign events, but everyone is on guard throughout: cagey, polite, careful with their words. Ivanka, Don Jr. and Eric decline to speak about the day the Capitol was stormed. Even Trump himself, once the undisputed king of Twitter all-caps, states his grievances with a calm and measured voice: “I assumed it would be a straight-up election and it wasn’t. It was very unfair.”

It’s all controlled and hyper-civilized, in contrast to what we know was really going in the White House in those post-election months: swearing, cajoling, renegade lawyering, entire plates of lunch thrown against the walls. It goes to show how hard it must be to be a documentarian, scratching at subjects who have been in the public eye since birth, practicing the art of presentation.

Maybe Holder didn’t ask enough tough questions to get the Trumps off-script. Or maybe he did get unprecedented access — it’s just that it was access on Trump terms.

But even the Trumps’ great efforts to control their presentation here, to gloss over the post-election madness, reveals something about the family’s mindset, and the way they might have collectively approached 2020’s electoral defeat. As the documentary shows, long before Trump entered the political arena, when the family business was real estate and casinos and steaks and airlines, he cultivated his image in service to a single idea: In Trumpland, everything is gilded and perfect. No matter what’s blowing up or shutting down or going bankrupt, it’s critical to look like you’re a giant success.

This, “Unprecedented” posits, was Trump’s approach to politics, too, and his attitude pre- and post-assault-on-the-Capitol. None of the interviews with Trump, for instance, suggest that he didn’t believe his claims of election fraud, but nothing suggests he truly did believe it, either. In a sense, the series implicitly argues, that was beside the point. In order to be a winner, he had to present himself as a winner. In his long experience as a public figure, he’d always been able to will that image into reality. The rest of the documentary shows what happens when Trump finally had to confront the fact that the act isn’t always enough.

Political documentaries often try to reveal a difference between a campaign’s front-facing image and the truth behind the scenes. “The War Room,” Chris Hegedus and D.A. Pennebaker’s 1993 documentary, focused on the scrappy operatives snarfing popcorn and quashing scandals in Bill Clinton’s 1992 campaign. “Journeys With George,” Alexandra Pelosi’s film about the 2000 George W. Bush campaign, shows the gulf between a malaprop-filled candidate and a relaxed politician who charms the reporters in the back of the bus. (There’s plenty of warm banter between the 43rd-president-to-be and Nancy Pelosi’s daughter, which feels dreamlike in this age of hyper-partisan hatred.)

Holder, it turns out, was thinking about the family dynasty in a slightly different way; he told <a href="https://www.hollywoodreporter.com/news/politics-news/unprecedented-documentary-filmmaker-alex-holder-jan-6-footage-1235173387/" target="_blank" link-data="{"linkText":"The Hollywood Reporter","link":{"target":"NEW","attributes":[],"url":"https://www.hollywoodreporter.com/news/politics-news/unprecedented-documentary-filmmaker-alex-holder-jan-6-footage-1235173387/","_id":"00000182-0831-defd-affe-dd3f9d7c0006","_type":"33ac701a-72c1-316a-a3a5-13918cf384df"},"_id":"00000182-0831-defd-affe-dd3f9d7c0007","_type":"02ec1f82-5e56-3b8c-af6e-6fc7c8772266"}”>The Hollywood Reporter that his film was a psychological study with the “vibe” of HBO’s hit series “Succession,” about a Rupert-Murdoch-style media mogul and the bitter infighting among his adult children. The parallels are on-the-nose: The chamber music over the opening credits feels like a note-for-note knockoff of the HBO score. In glass-walled offices and palace-chic drawing rooms, Don Jr., Ivanka and Eric reminisce about growing up with Trump as a dad with some weird mix of awe and resignation. “He used to sing to me when I was little,” Ivanka recalls, in a moment that approaches tenderness, until she acknowledges that her father “didn’t go to our sports games, that wasn’t his thing, and he was pretty unapologetic about it.”

Much of the documentary circles around their admiration for their father and their gratitude for his approval. A range of journalists and academics fill in the gaps where the Trump kids leave vagaries and platitudes — explaining, for instance, that Trump’s extremely public 1990 divorce from their mother Ivana was a tabloid frenzy largely because Trump made it so, secretly feeding the press to help promote a swashbuckling Trump brand.

Now, politics is part of the Trump brand, too, and in “Succession” style, “Unprecedented” spends a lot of time pondering which heir will become the next family politician. The cameras capture all three elder children on the campaign stump, talking to modest-sized but enthusiastic crowds and greeting swooning supporters. The filmmakers dwell on the irony that, while regal Ivanka is her father’s clear favorite, it’s Don Jr. — who turned himself into a gun-toting outdoorsman to rebel against his golf-obsessed absentee dad — who has the ability and temperament to connect with MAGA nation. At one campaign rally, Don mocks the idea of nonbinary gender: “I’m gonna just say ‘boy’ because I don’t have time to listen to the other 4,239 genders! We’re OK with that? OK? He/him!” When he rolls his eyes and holds up his hands in an exasperated shrug, he looks, well, just like his dad.

The closest “Unprecedented” gets to unguarded moments is the footage, seen in trailers, of various Trumps in stage-managing mode as the filmmakers set up their shots. The president thinks long and hard about whether a glass of water should be in the frame. Ivanka fretting about an infinitesimal line of body fat that she thinks is visible on the waist of her billowing sea-green dress. (It’s truly hard to see what she means, but if you’ve ever cringed when someone else’s Instagram post captured your bad hair day, you have to feel some sympathy for Ivanka here.)

Then the election happens, and all of that image-making crashes into the legal system, and the politicians at every level who refuse to take part in Trump’s fantasy show. It becomes clear that Trump won’t concede. And as the filmmakers realize they’re witnessing history, the mood pivots from dishy palace intrigue to more sober documentation of events, and a portrait of a family that won’t let go. Trump marvels that election officials across the country won’t bend to his demands. “Signature verification and it’s a total win. They don’t want to do it and they’re Republicans. Now what’s their problem? They’re stupid, OK? They’re stupid people.” It’s left to the viewer to decide what he means: Are they stupid, in his mind, because they can’t see the evidence of actual election fraud? Or are they stupid because they’re not willing to use their power to bend the facts as Trump sees fit? Ivanka — who told the January 6 committee under oath that she believed former Attorney General William Barr when he said the election wasn’t stolen — is far cagier here for the cameras, as she describes her father’s crusade. “As the president has said, every vote needs to be counted and every voice needs to be heard,” she says, parsing every syllable.

This is the real insight of the documentary: We are watching, in real-time, as Trump’s myth-making hits an obstacle. Finally, he’s met a fact he can’t contort to match his personal storyline, as he has with so many other parts of his life.

The filmmakers are present to capture the way the Trumps’ public denials affected the people who remain in their thrall. They document still-adoring crowds at Trump’s post-election rallies, watch Trump rev up the crowd at Washington’s Ellipse Park on the morning of January 6, and get an inside angle on the assault on the Capitol building. In some hard-to-watch scenes, insurgents howl in pain as they’re tear gassed outside the building, paying a physical price for their loyalty to the family they’ve put on a pedestal.

That family, meanwhile, is safely ensconced in palatial rooms, declining to say a word on the record. “Let’s skip the 6th,” Eric says in an interview, and when the filmmakers catch up with the Trump kids again in Florida, after Trump has finally left the White House, they’re all spinning again. “We’re two-and-oh in terms of impeachments,” Eric brags. “I’m trying to be very present in this moment with my family,” Ivanka says, declaring that she’s at peace with her White House experience. And while the former president won’t answer the big question — will he run again in 2024? — he’s insistent that everything is going his way: the polls, the people, the arc of history. “We are all working together. We’re getting along incredibly well,” he says.

If you’re a Trump, that’s a matter of faith. Or so you say.