The one word Biden won’t say in Israel 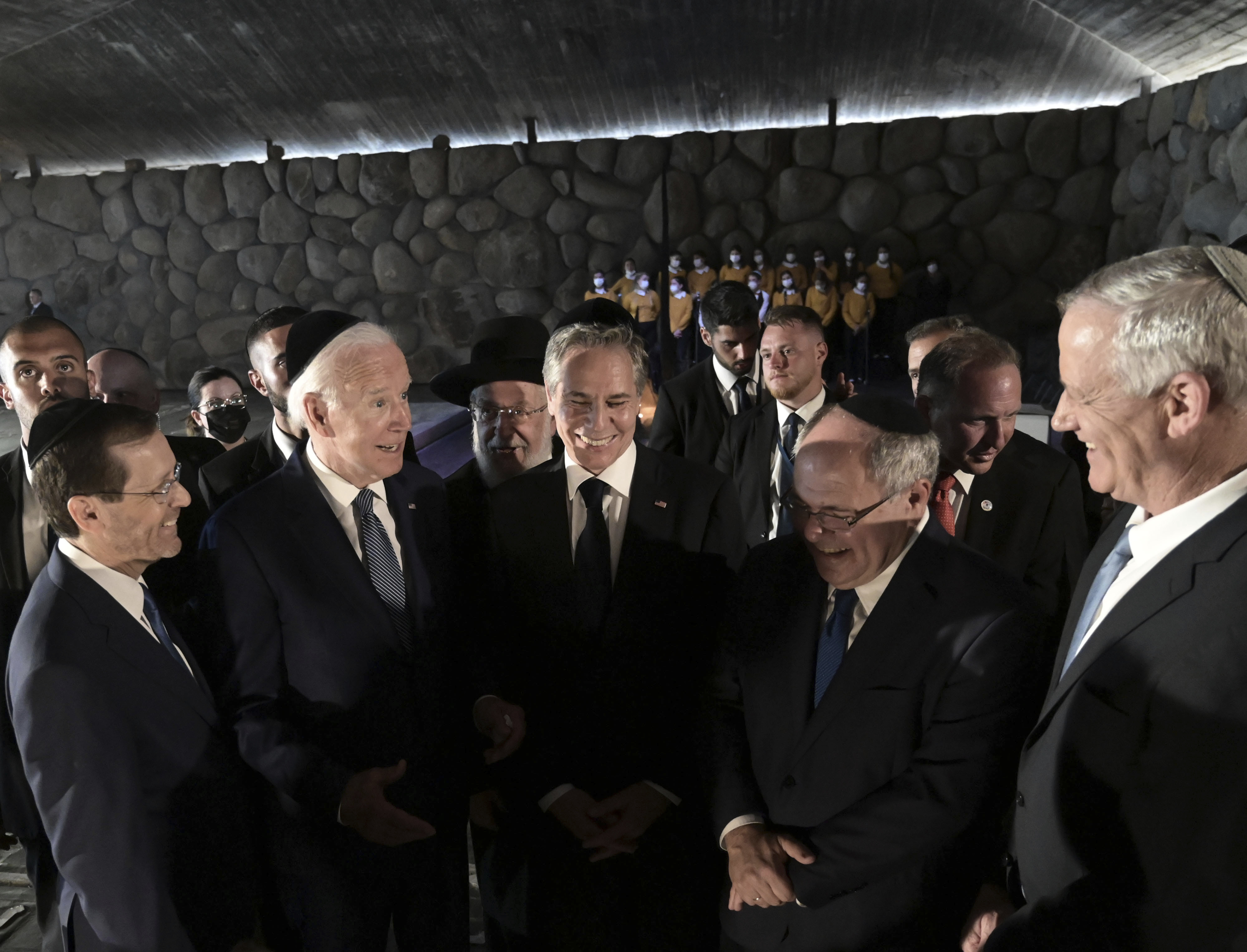 JERUSALEM — For most of his presidency, Joe Biden has ignored or minimized talk about his immediate predecessor, or, as he once called him, “the former guy.”

But as he visits Israel, the West Bank and Saudi Arabia this week, Biden can’t escape the legacy that Donald Trump left behind.

It was there at the entrance of the King David hotel, where Biden is staying and where the last president’s gaudy signature is smack in the middle of the lobby.

But there are non physical reminders as well. Despite their smiles and handshakes, it’s not lost on Israeli and other Middle Eastern officials that Trump made the region the scene of his first foreign trip, while Biden waited a year and half into his presidency to stop by.

Trump made Jerusalem now the U.S.-recognized capital of Israel. He made it so there’s no longer a U.S. consulate that engages with the Palestinians. His policies assured that the dream of a Palestinian state is nearly dead and that Israel has more Arab friends than ever.

Biden has grudgingly accepted this new reality and will do little to change it during roughly 48 hours on the ground in Israel. Comparisons to Trump’s time in the holy land will be unavoidable since the 45th president threw aside convention to be the first to visit the Western Wall and put his name directly on an American embassy in Jerusalem, whose courtyard is dedicated to his son–in-law, Jared Kushner.

Biden isn’t aiming for grand gestures: He wants to show the U.S.-Israeli relationship remains on solid footing before heading to a much trickier meeting in Jeddah, Saudi Arabia.

The actual word “Trump” is unlikely to slip past Biden’s lips.

“I assumed he would stay far away from that name. Like Candyman,” said Kirsten Fontenrose, a former top National Security Council official for the Gulf in the Trump administration. “He won’t want to draw any comparisons…He can’t afford to have references in the Arab press equating their policies.”

“What purpose does bringing up Trump serve? I don’t see any benefit for the U.S. president doing that,” said Randa Slim, a senior fellow at the Middle East Institute, adding there’s no imperative to mention Trump even in a show of bipartisanship due to America’s longstanding support for Israel.

Biden may have no incentive to discuss his predecessor. But his team has not shied away from touting a rare area of agreement it has with “the former guy.”

The Biden administration has embraced the Abraham Accords, a Trump-backed effort to improve Israel’s relations with other Arab countries and better integrate it economically, diplomatically and otherwise into the Middle East. Those accords were brokered by the Trump White House, and they’ve normalized relations between Israel and a number of Arab countries, including Bahrain, the United Arab Emirates and Morocco.

Arab nations had long made it clear that they would not negotiate with Israel until the Palestinians received an independent state of their own. But the Abraham Accords showed that Arab-Israeli relations could be decoupled from the Israel-Palestinian conflict.

The Biden White House wants to build on what Trump started. “We strongly support the Abraham Accords and normalization agreements between Israel and countries in the Arab and Muslim worlds,” an administration official told POLITICO.

Biden aides privately concede that Trump’s deals have helped lower the temperature in the Middle East. One of the president’s objectives on this trip is to push Israel and Saudi Arabia closer together, possibly toward an eventual Abraham Accord of their own.

Israeli officials, for the most part, are hesitant to openly discuss Trump while Biden is in the region.

In the lead-up to the visit, a POLITICO reporter tried asking a half-dozen Israeli officials if they were pleased Biden is continuing Trump’s policy of keeping the U.S. embassy in Jerusalem and building on the normalization deals.

None would comment, not even on background. Eventually, a seventh Israeli official was willing to say, “Of course we’re happy,” that Biden hasn’t changed course on major Trump policy shifts related to the region.

The Biden administration has reversed some of Trump moves in the Middle East. For instance, it restored hundreds of millions of dollars in funding for the Palestinian people, and it has re-established a diplomatic channel to the Palestinians, even though it has not managed to re-open the consulate.

The Biden team also says it supports a two-state solution for the Israeli-Palestinian conflict — even as Trump’s approach dramatically undermined that possibility —and has warned against Israeli settlement expansion in land claimed by Palestinians for a future state. And it’s trying, but failing, to revive the Iran nuclear deal that Trump tore apart in 2018.

Those shifts, however, are minor when compared to the changes Trump and his team pushed through, which heavily favored Israel. In some cases, legal and diplomatic hurdles have prevented Biden from changing Trump policies — Israel, for example, won’t give permission for the reopening of the consulate for Palestinians in Jerusalem.

“We would like to see a consulate in East Jerusalem,” national security adviser Jake Sullivan told reporters Wednesday on Air Force One, but “that requires engagement with the Israeli government, requires engagement with the Israeli leadership.” National Security Council spokesperson John Kirby clarified Sullivan’s comments, saying the top aide meant to just say “Jerusalem,” as is consistent with current U.S. policy.

Biden’s visit to the West Bank, where he’s supposed to meet with Palestinian President Mahmoud Abbas, could prove unusually sensitive. Abbas despised Trump, and it’s possible he may use this moment to air grievances he had with the former president. Trump and Abbas met in 2017 in Bethlehem, a session some reports indicated was tense and awkward.

Many Palestinians have been disappointed by Biden’s relative lack of attention to their situation. Biden is expected to announce $100 million for Palestinian hospitals, giving more aid to make up for the assistance the Trump administration stripped away. But that’s peanuts compared to what Palestinians say they need and a far cry from what they want: The resuscitation of peace talks.

“Are the Palestinian people excited about the visit? No,” a Palestinian official told POLITICO. While the Biden administration has made adjustments to the U.S. rhetoric about the region, “from a policy perspective, nothing has changed.”

While giving the idea of a two-state solution lip service, including saying in Israel that it remains “the best way” forward for both parties, Biden has put virtually no diplomatic muscle behind it. His administration views it as a no-win cause, not least because neither of the parties seems truly ready for serious talks.

The decades-old conflict is further complicated by Hamas, a militant group the U.S. considers a terrorist organization and which controls the Gaza Strip. One of Biden’s first major foreign crises as president was an 11-day battle last year between Israel and Gaza militants.

Overall, Biden’s swing through the region is likely to be a more traditional, quieter affair than Trump’s 2017 trip to the Middle East, which was marked by spectacle.

Trump stopped first not in Jerusalem, but in Riyadh, where his image was plastered on highway signs and projected on the sides of buildings, including the luxury Ritz-Carlton hotel where he stayed (and where later that year Saudi Crown Prince Mohammed bin Salman would imprison fellow royals and elites he accused of corruption).

Trump was greeted with a lavish ceremony that featured a traditional Saudi sword dance. He also stood next to the Saudi king and president of Egypt to pose — for some unclear reason — with a glowing orb.

Trump’s visit to Israel, his next stop, also included a highly symbolic visit to Jerusalem’s Western Wall —one of Judaism’s holiest sites — as well as unending pledges of love from Netanyahu.

The Netanyahu-Trump relationship was mutually beneficial: his pro-Israel bona fides helped Trump rally his evangelical base while Netanyahu got full-throated support from Washington during tense elections and judicial problems as well as a lopsided White House peace proposal that met many of Israel’s demands at the expense of the Palestinians.

Biden is unlikely to form such a relationship with Israel’s caretaker Prime Minister Yair Lapid, especially since Lapid may no longer lead the country following Israel’s fifth elections in under four years this fall. Biden may have to soon once again deal with Netanyahu — who himself may in a couple years’ time get Trump back. But if Biden leaves Israel having reduced the subtle pining in Jerusalem for Trump, that may be enough.